Luis Lopes was the star attraction as Aberdeen beat Hearts 2-0 to move up to fourth in the Scottish Premiership.

The Cape Verde striker put the Dons ahead in the 74th minute and then set up his side’s second goal for Vicente Besuijen five minutes later to seal the win.

Aberdeen lined up in a revamped 3-5-2 formation after their defeat to Dundee United last week, with Lopes partnering top-scorer Bojan Miovski in attack.

Hearts showed four changes from their midweek loss in Florence, and were forced to take off Andy Halliday after just 10 minutes, Lewis Neilson coming off the bench to replace him.

The home side had the first real sight of goal just before the half-hour mark when Leighton Clarkson played in Miovski on the edge of the area, but after creating space for himself, he shot disappointingly wide.

Hearts should have been in front a minute later when Stephen Humphrys pulled back for Alex Cochrane, but the defender completely miscued allowing Kelle Roos to save when it seemed a goal was inevitable.

Cochrane turned creator two minutes later when his cut back from the left found Lawrence Shankland, but the former Aberdeen man could only find the side-netting.

Hearts’ good spell continued as Robert Snodgrass saw a low shot from distance held by Roos, but Aberdeen should have been in front in first-half injury time.

Toby Sibbick’s error presented the ball to Miovski and he slipped in Lopes, who homed in on goal before being denied by the advancing Craig Gordon.

There was still time before the interval for Shankland to attempt to lob Roos, but the goalkeeper got a touch to turn the effort onto the crossbar.

The second half started in similar fashion, as Roos had to be quick off his line to deny Humphrys as the striker pounced on a poor pass back from Dons captain Anthony Stewart.

Aberdeen quickly responded with Lopes’ angled shot forcing a save from Gordon, before Miovski passed up the best chance yet just before the hour, turning Ross McCrorie’s driven cross wide of goal on the slide.

Chances were flowing at either end now, and Shankland threatened again on the hour, somehow turning Cochrane’s ball in from the left past the post.

The deadlock was finally broken in the 74th minute as Lopes was slipped in by Ylber Ramadani in the left channel, and set himself before angling a low drive beyond Gordon.

The former Benfica player turned provider five minutes later, playing a neat pass to Besuijen who took a touch before firing past Gordon.

There was a further blow for the visitors as substitute Peter Haring suffered a head knock leading to a lengthy stoppage before he was replaced by Jorge Grant. 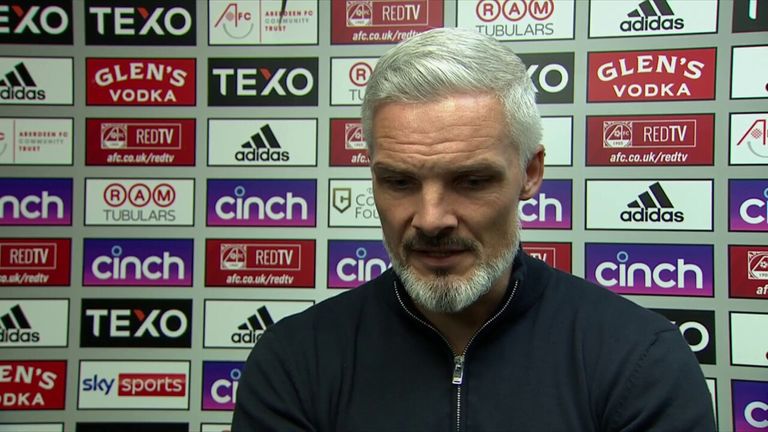 “I thought it was the perfect reaction to what was a disappointing and embarrassing result for us last weekend.

“When we lost against Hibs earlier in the season we bounced back well against Kilmarnock and I’m pleased we were able to do it again.

“It shows the character within the group. It’s not always easy to play in front of your home fans after a result like that. The guys rose to the occasion and gave the fans a little bit back.

“As a manager you leave yourself open to criticism if you make wholesale changes like that, if it doesn’t come off.

“We’ve been guilty of conceding goals and our goals-against record is pretty poor. We looked secure and comfortable out of possession.”

Neilson: Hearts must stick together during injury spell 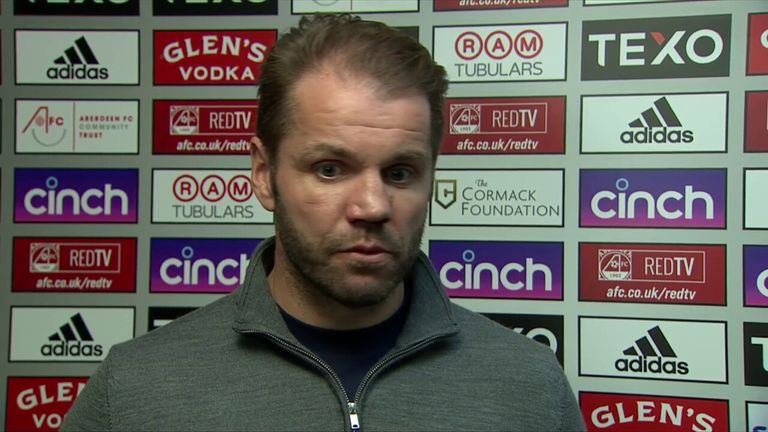 “We had some top chances to score goals but we didn’t take them and conceded two poor goals. It’s a makeshift team at the moment and we’ve lost another two today.

“We’re asking players to fill in in different positions and you can see certain aspects of that. We’ve got to stick together and grind through it.

“I thought first half we were in the ascendency. In the second, Aberdeen got into it a bit more and we became a bit more disrupted which can happen with younger players and a makeshift defence.

“We need to make sure that when we get to the World Cup break that we’re in a good position from which to kick on.”

Aberdeen have a Premier Sports Cup match against Partick Thistle on Wednesday night before returning to league action at Motherwell on October 22.

Hearts host Celtic in their next Scottish Premiership match on the same day, live on Sky Sports. Kick-off 12.30pm.