Liverpool forward Diogo Jota has committed his future to the club by signing a long-term contract extension.

The new deal for the 25-year-old, who has scored 34 goals in 85 appearances since joining Liverpool from Wolves in the summer of 2020, is understood to run until 2027.

Jota joins fellow Liverpool forward Mohamed Salah in signing a new deal with the club this summer, following the departure of Sadio Mane to Bayern Munich.

“Well, (I’m) really proud, I have to say,” Jota told Liverpoolfc.com after signing his new contract.

“Obviously since I arrived two years ago I established myself as an important player in this team – that’s what I wanted from the beginning.

“Now, signing a new long-term deal, it’s obviously from the club’s perspective proof of the belief in myself as a player. For me, obviously it’s really good to establish I’ll be here for a while.”

Jota has not featured in Liverpool’s pre-season matches, and Saturday’s Community Shield win over Manchester City, after suffering a hamstring injury on international duty for Portugal in June. 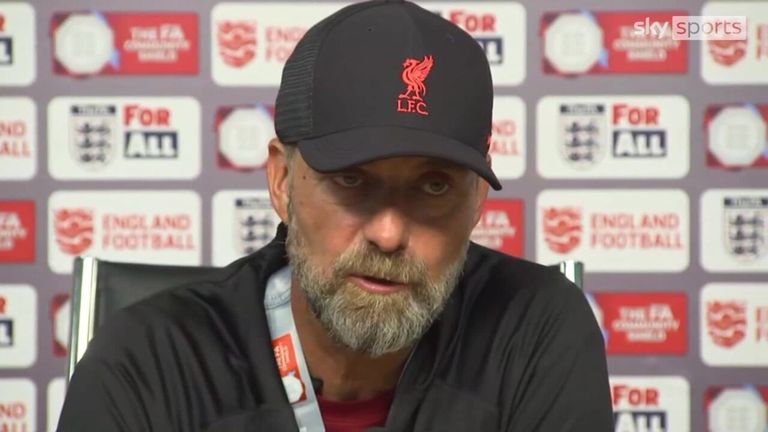 Jurgen Klopp was full of praise for his Liverpool side following their 3-1 win over Manchester City in the Community Shield.

He confirmed that the issue is set to keep him out for a “few more weeks”, almost certainly ruling him out of Saturday’s Premier League opener at newly-promoted Fulham and the following matchday’s clash with Crystal Palace at Anfield.

“Unfortunately for me I had an upset in this pre-season because I got injured (in the) last game of the season playing with Portugal,” Jota added. “So I was coming back in this pre-season, I felt it a little bit again. So it will be a few more weeks, I would say.”

But after then facing Crystal Palace, Jurgen Klopp’s side will take on Man Utd at Old Trafford on August 22, with both those games live on Sky Sports.