Dundee were left bottom of the Premiership after being held to a goalless draw by Dundee United at the Kilmac Stadium.

The two Tayside clubs put in a huge effort with home substitute Zak Rudden coming close on a couple of occasions on his debut and United striker Nicky Clark missing a terrific chance late in the game.

Highlights of Scottish Premiership match between Dundee and Dundee United.

However, when the dust had settled following an enthusiastic encounter, with St Johnstone beating Livingston 2-1 away, the Dark Blues are now behind the Perth side on goal difference with Ross County five points ahead.

Both teams had strengthened in the transfer window and Vontae Daley-Campbell, the loan signing from Leicester, started for Dundee while fellow new signing from Partick Thistle, Rudden, was on the bench.

Captain Charlie Adam, Danny Mullen and Niall McGinn came into the side, the latter making his first start for the club following his move from Aberdeen.

Kieran Freeman, Ross Graham – making his first start for United – and Marc McNulty were the changes for the visitors with new signings Kevin McDonald and Tim Akinola, on loan from Arsenal, among the substitutes.

A flare thrown on to the pitch delayed kick-off but it was a typically frenetic start to the derby with both sides swapping early corners and having moments of possibility inside the box without really troubling the respective keepers.

However, just before the half-hour mark United keeper Ben Siegrist was at full stretch to push away Paul McMullan’s glancing header from McGinn’s cross from the left.

The home side had the first decent effort of the second half when McMullan sent in a volley from distance which was clutched out of the air by Siegrist but in the main, defences remained on top and any shooting remained erratic.

United’s Liam Smith replaced Freeman in the 56th minute before Dundee’s Jordan McGhee came on for Daley-Campbell, as the substitutions began.

Adam was booked for a foul on Graham before McGinn and the Dens Park skipper made way for debutant Rudden and Luke McCowan and Dundee continued to press their neighbours but without the penetration required.

United earned a corner in a rare attack and striker Clark volleyed Dylan Levitt’s delivery over before Rudden, at the other end, had two attempts cleared off the line, first in the 71st minute by skipper Ryan Edwards and then moments later by Clark from the resultant corner.

Then, as play stretched, United had a spell of pressure and a dangerous pass across goal from substitute Ilmari Niskanen, on for McMann, found no takers before Clark somehow knocked a pass from Tony Watt over the bar from less than six yards.

What the managers said 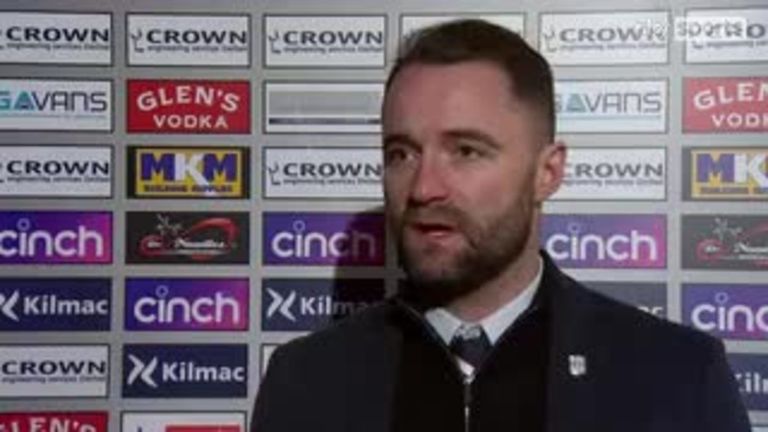 James McPake says his Dundee side need to get more ruthless in front of goal following their 0-0 loss against Dundee United.

“There was a lot of fight at times. Both teams gave a good account and battled.

“We’re disappointed we couldn’t get that quality or final ball because we got into some great areas.

“They’ll be disappointed with Nicky’s chance but credit goes to (Ryan) Sweeney as he made it really hard.

“We’re lacking that wee bit at the top end but as a unit we’re looking more solid.

“We were very wasteful at times at the top end but it’s hard to criticise them. We need to get it right at the top end of the pitch and I believe we will.

“We had to use the break to get us defensively sound and that’s three clean sheets in a row which was a priority because we were conceding too many chances. 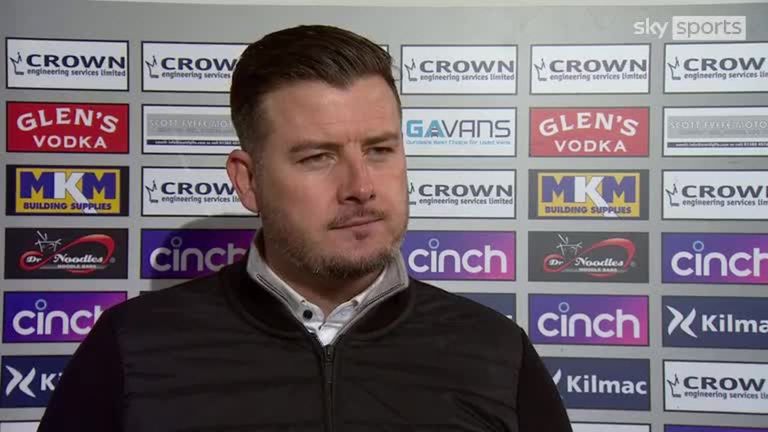 Tam Courts says he feels disappointed but also glad that his Dundee United side gained a point and kept a clean sheet against their derby rivals.

“It was chaotic and frenzied like a lot of derbies. In the first 45 minutes I felt frustrated considering it was chaotic for prolonged periods and the way we committed to the game didn’t suit us.

“The latter part of the game showed us using the ball better and engineering quality opportunities.

“I’m pleased with the clean sheet, the attitude and condition considering we played on Saturday and they didn’t and they’re fighting for their lives.

Dundee host Ross County in the Scottish Premiership on Saturday at 3pm while Dundee Utd visit St Johnstone on the same day at 3pm.