England collapse to 116-7 after rolling New Zealand for 132 on 17-wicket day at Lord’s; Matthew Potts takes 4-13 on debut as the Ben Stokes and Brendon McCullum era starts with a bang but then nosedives as hosts lose seven wickets for 41 runs – D2, 10.15am, Friday, SS Cricket

England’s new era started with an all-too-familiar batting capitulation as Ben Stokes’ side crumbled to 116-7 after skittling New Zealand for 132 on a wicket-laden day one of the first LV= Insurance Test at Lord’s.

New captain Stokes and head coach Brendon McCullum took over an England side with 11 defeats and just one win in their last 17 matches and their lowest Test points rating since August 1995.

The hosts were full of confidence with the ball as they razed the reigning World Test champions in exactly 40 overs with debutant Matthew Potts snaring 4-13 and the recalled James Anderson 4-66.

However, they wilted with the bat in scenes akin to the Ashes series after a 59-run opening stand between Zak Crawley (43) and Alex Lees (25) was snapped, losing seven wickets for 41 runs before closing 16 runs in arrears.

Stokes (1) was caught behind ninth ball and former skipper Joe Root (11) steered to gully, with new No 3 Ollie Pope (7) and Jonny Bairstow (1), who was preferred to the in-form Harry Brook at No 5, also falling cheaply.

New Zealand were 45-7 at one stage but made it into three figures thanks principally to Colin de Grandhomme (42 not out from 50 balls) before Stokes bagged the final Black Caps wicket on a day dominated by the seamers.

It was the home pacers initially – including Potts, who made Kiwi captain Kane Williamson his maiden Test wicket – but then New Zealand’s, with Tim Southee, Trent Boult and Kyle Jamieson each striking twice.

Durham seamer Potts made a two-ball duck late in the day having shone with the ball earlier on, leaving Ben Foakes (6no) and Stuart Broad (4no) unbeaten at stumps and England ruing letting a superb position slip.

Another sour note for the home side was the withdrawal of spinner Jack Leach to concussion after he took a heavy fall in the field in the sixth over – Matt Parkinson becoming the side’s first concussion substitute as he hotfooted it down from Manchester to make his debut as a like-for-like replacement. Potts bagged 4-13 from 9.2 overs, with Kane Williamson and Daryl Mitchell among his scalps

Potts bagged 4-13 from 9.2 overs, with Kane Williamson and Daryl Mitchell among his scalps

Durham seamer Potts flourished on his Test bow – he had figures of 3-8 from eight overs at lunch – while Anderson (4-66) was more expensive but just as prolific as New Zealand flopped after winning the toss.

The tourists were 12-4 inside the first hour once Potts nicked off Williamson with his fifth ball in Test cricket.

Bairstow’s trio of slip catches had reduced New Zealand to 7-3 and earned Anderson and Broad (1-45) wickets on their return to the Test side, with England’s two most prolific bowlers having been dropped for the 1-0 series defeat in the West Indies in March.

Bairstow took a stunning one-handed grab to remove Will Young (1) off the bowling of Anderson in the third over and followed that up by accounting for Tom Latham (1) off the same bowler in the fifth, this time at the second attempt as the Kiwis limped to 2-2.

Broad, who had vowed to put his “heart and soul” into the first Test and play like he was making his debut, put Bairstow to work again when he induced an outside edge from Devon Conway (3), a player who had made 200 on this ground against England last summer in his maiden Test innings. 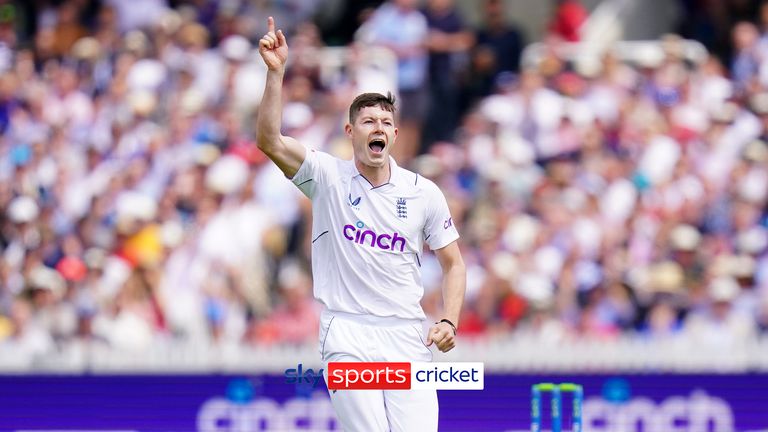 It was Potts who enjoyed a memorable introduction to Test cricket on Thursday, starting with the wicket of Williamson in his first over as he subjected the batter to a fifth single-figure score in a row after a duck in a tour match last weekend followed struggles in the Indian Premier League.

Potts added the scalps of Daryl Mitchell (13) and Tom Blundell (14) before the break as New Zealand crumbled to 36-6 – Mitchell chopped on and Blundell was bowled off stump.

England’s scintillating start ratcheted up the excitement even further at Lord’s with fans having poured into the ground with new-found optimism following McCullum and Stokes’ appointments.

The day was also a poignant one, with tributes paid to the late, great Shane Warne and Stokes wearing a shirt bearing Graham Thorpe’s name and number – 564 – at the toss with the former England batter and assistant coach seriously ill in hospital.

The main commentary box at Lord’s has been renamed after Warne, while after 23 overs of play, players and spectators stood to complete 23 seconds of applause to remember the former leg-spinner following his passing at the age of 52 in March – Warne wore the 23 jersey as a player in honour of his childhood hero, Australian rules footballer Dermott Brereton. 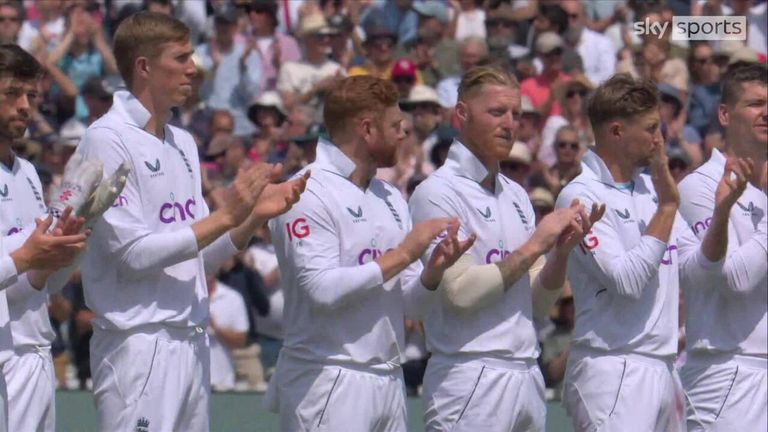 After lunch, Potts was the catcher on both occasions as Anderson had Jamieson (6) and Southee (26) caught at deep fine leg – Southee falling after a counter-attacking eighth-wicket stand of 41 from 36 deliveries with De Grandhomme.

Anderson thought he had bagged a 32nd Test five-wicket haul and eighth at Lord’s, only for Ajaz Patel to overturn an lbw decision by dint of an inside edge – and it was Potts eyeing a debut five-for when he went on to trap Patel leg before for seven.

The 23-year-old pulled up two balls into his 10th over – the ECB later revealed it was due to cramp and nothing more serious – so Stokes took over bowling duties and polished off the innings with his 10th delivery when Trent Boult (14) scuffed a ball to Ollie Pope at short midwicket.

Pope soon put his pads on, ready to come in at No 3 for the first time in his red-ball career, but had a 14-over wait before heading to the middle as Crawley and Lees saw off the new ball. 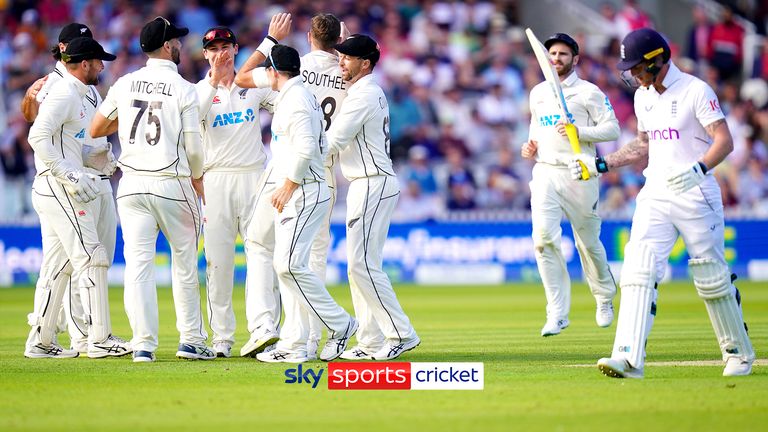 Lees’ running was jittery early on and it was Crawley who dominated the scoring, striking seven boundaries before he edged Jamieson behind on the drive from the 56th delivery he faced, triggering a procession of wickets.

Pope edged Jamieson through to wicketkeeper Blundell, Root steered De Grandhomme to gully and Lees was trapped lbw by Southee before Stokes snicked Southee behind, Bairstow dragged Boult on to his stumps and Potts then swiped Boult to slip taking on a short ball.

As such, the game remains evenly poised heading into day two, while England fans have a feeling of déjà vu after watching yet another batting breakdown.

Watch day two of the second LV=Insurance Test between England and New Zealand live on Sky Sports Cricket and Sky Sports Main Event from 10.15am on Friday.

For someone who hates CM Punk, MJF sure knows the playbook

“Start me, I’ll score and I’ll win the match” – Benzema recollects conversation during ‘problem’ with Mourinho at Real Madrid 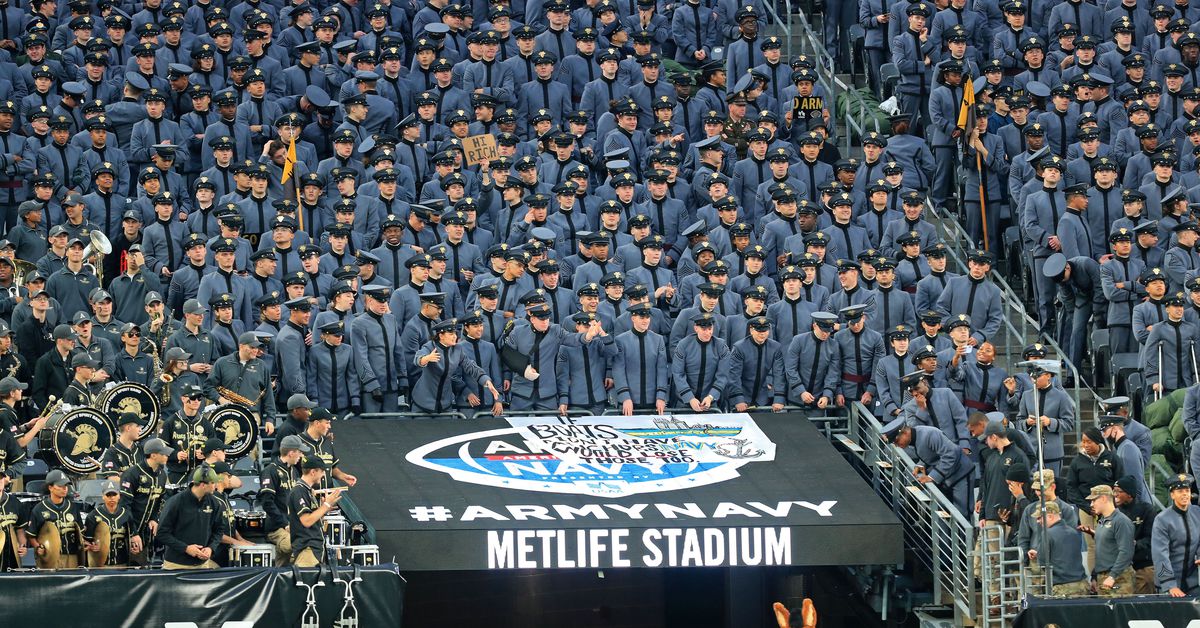 Army and Navy unveil epic uniforms for this year’s meeting