Giovanni van Bronckhorst has revealed he faced “unique challenges and some very difficult circumstances to operate in” which led to his Rangers exit.

Van Bronckhorst was sacked by the Scottish Premiership club last week after one year in charge at Ibrox, with the Gers nine points behind leaders Celtic.

The 47-year-old also oversaw a sobering Champions League campaign as the club lost all six group-stage matches, including a 7-1 hammering by Liverpool at home.

Van Bronckhorst – who signed a three-and-a-half-year deal to replace Steven Gerrard last November – has become one of the shortest-serving permanent managers in the club’s history, although he says there were issues behind the scenes this season.

Take a look back at some of Giovanni van Bronckhorst’s highs and lows from his time in charge at Rangers.

“This season, like every year at Rangers, the first priority is domestic success,” he said in a statement on his Instagram.

“I understand the hurt when wins become draws, and worse, when we experience defeat. That isn’t acceptable at a club of Rangers’ standing, no one understood that and felt that more than I did. I faced unique challenges and some very difficult circumstances to operate in.

“Rangers FC will always be in my heart and I wish the club all the success for the future. Once a Ranger, always a Ranger.”

Among permanent Rangers managers, only Pedro Caixinha and Paul Le Guen have had shorter reigns at the club

Van Bronkhorst continued: “The opportunity to manage an institution like Rangers FC is a privilege which very few are afforded. As a former player, I understood the responsibility and magnitude of the task. 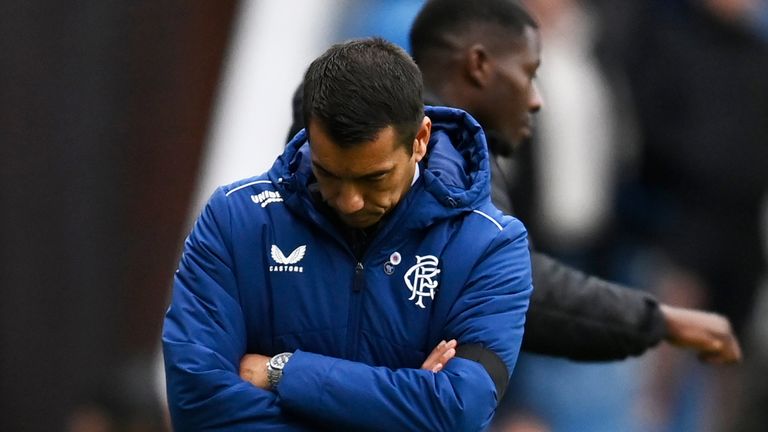 Kris Boyd says the sacking of Giovanni van Bronckhorst comes as no surprise as after Rangers’ poor recent form.

“My backroom team and I worked with energy, passion and were driven with a belief that we could achieve amazing things. We treated our roles with respect, optimism and determination.

“We experienced some incredible highs, especially on our European journey to Seville. Winning the Scottish Cup for the first time in over a decade and qualifying for the group stage of the Champions League is something I am very proud of.

“The passion of our support drove us on to achieve those wonderful memories. For that, I am forever grateful to every single one of you who travelled near and far, spent your hard-earned money, and never gave up supporting our team.” Rangers are in talks with QPR head coach Mick Beale over the vacant managerial role at Ibrox, after being granted permission to open negotiations from the Loftus Road club.

Sky Sports News understands Beale is keen on the prospect of becoming Rangers’ 18th permanent manager and has maintained good relations with Rangers since his departure as coach last November.

The 42-year-old was a part of Steven Gerrard’s backroom team that won the club’s 55th top-flight title in 2021 before leaving for Aston Villa.

Beale then made his move to become boss at QPR in the summer and turned down an approach from Wolves last month, citing “integrity and loyalty” as the reason for rejecting the Premier League job.

Sky Sports News can reveal Beale and his staff were in contract extension talks with QPR before Rangers’ interest developed.

Reports of explosion before fire in downtown Toronto | CBC News