Gilbert Burns isn’t buying into the hype surrounding Khamzat Chimaev. While Burns acknowledged Chimaev’s elite skillset as a fighter, he doesn’t see ‘Borz’ as the “monster” that people have made him out to be.

“I think he’s very good for sure. People are getting crazy excited, ‘He got blah, blah, whatever.’ The way we say in Portugese, ‘We don’t lie but be make it bigger.’ He’s not a lie but we make it bigger. He’s not a lie. The guy is very good but we made him a super monster. I don’t think. I think he’s very very good, high level wrestling, good striking, heavy hands, we saw a couple of knockouts, good grappling; but I don’t see like, ‘Wow, that monster.'”

Burns earned a title shot against Kamaru Usman after racking up a six-fight winning streak. He was outclassed by Usman last year and since then, the Brazilian has bounced back with a dominant decision win over Stephen Thompson. He is scheduled to meet Chimaev at UFC 273 on April 9.

Meanwhile, Chimaev currently holds a perfect 10-0 professional record. The surging prospect has earned a performance bonus in each of his UFC wins so far. Currently ranked outside the top ten, he will be looking to break into the top five with a win over No.2-ranked Burns.

Khamzat Chimaev believes Gilbert Burns is “stressed” ahead of UFC 273

Gilbert Burns previously claimed to have hired two secret Russian wrestlers to help him prepare for his upcoming bout against Khamzat Chimaev. ‘Borz’ took Burns’ claims as a sign of desperation.

According to Chimaev, Burns knows that he won’t be able to score a takedown in their upcoming fight. The Russian-born Swede recently said on The MMA Hour:

“He’s said, ‘Maybe we’re going to wrestle, maybe we’re going to grapple, maybe we’re going to come in with strikes.’ He doesn’t know what I’m going to do. He’s stressed. Now he has big drama in his head [that] he thinks about. When you listen to him, you understand — the guy is done. He said, ‘I have two secret Russian wrestlers.’ How you f****** learn wrestling in two months, two or three months? Never. In his dreams, he can’t take me down. He knows that.”

Watch Khamzat Chimaev’s appearance on The MMA Hour below: 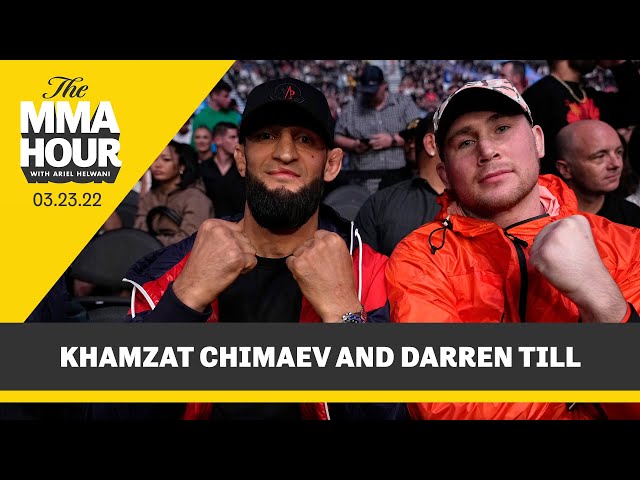 UFC 273 is set to go down on April 9th in Jacksonville, Florida. The pay-per-view will be headlined by a featherweight championship bout between Alexander Volkanovski and ‘The Korean Zombie’. The co-headliner sees Aljamain Sterling and Petr Yan square off in a title-unification bout.