Brendan Schaub believes Khamzat Chimaev needs to make some adjustments to win a potential bout against Colby Covington. UFC president Dana White expressed interest in a potential fight between ‘Borz’ and ‘Chaos’ before and after Chimaev’s victory over Gilbert Burns at UFC 273.

While Schaub was completely sold on Chimaev’s hype a week ago, the Burns fight has slightly altered his opinion. According to the TUF alum, ‘Borz’ needs to learn from his last fight and make the necessary changes to his game in order to beat Covington. The 39-year-old said on a recent episode of The Schaub Show:

“Colby’s gonna put a freaking flag in the ground and go, ‘This is Russia vs. America, whose side are you on?’ And it’s gonna build up to that ABC card And it’s gonna do gangbuster numbers. But I’ll say this, and again this is coming from the president of the Khamzat fan club – If that same version of Khamzat shows up that fought Gilbert Burns, if he doesn’t learn form the experience, which I think he does… I’m just gonna caveat this with: If he doesn’t make some adjustments, he will not beat Colby Covington.”

Watch Brendan Schaub weigh in on a potential Covington vs. Chimaev bout below:

Khamzat Chimaev will likely claim the No.2 spot in the UFC welterweight rankings following his recent win over Gilbert Burns. Colby Covington currently occupies the No.1 spot at 170 pounds. The consensus is that a potential bout between Chimaev and Covington will determine the next title challenger.

After racking up four consecutive stoppage victories in the UFC, Khamzat Chimaev faced Gilbert Burns, his biggest step-up in competition till date. Burns proved why he is a top welterweight contender, delivering an instant classic against ‘Borz’. Chimaev ultimately reeled in a closely contested decision after the longest fight of his professional career.

After being tested by Burns, many started questioning the aura of invincibility that surrounds Chimaev. However, Dana White believes the hype behind the undefeated phenom is still real. White claims that no amount of training can prepare a fighter for the absolute war that went down at UFC 273. The 52-year-old said at the UFC 273 post-fight presser:

“Well, he’s human. I mean any a**hole that said that doesn’t think the kid’s human. He’s a human being, and he just beat the No. 2 welterweight in the world in the UFC with a couple of fights in the UFC. If you don’t think he’s the real deal, you’re out of your mind. Yeah, he’s human. You know, and funny, you know, Till keeps telling me, you know, this guy never gets tired. This guy never ever runs out of energy… but you can’t train in the gym for what happened tonight. You can’t.”

Watch Dana White’s appearance at the post-fight presser below: 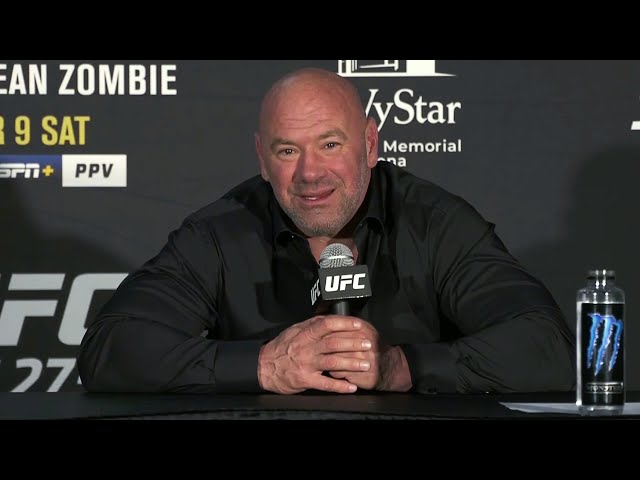 ASK IRA: Might Heat playoff rotation not be such a big thing?

Rihanna Opens Up About Unplanned Pregnancy, Fears of Postpartum Depression