Iran vs USA is a crucial match for both sides at the 2022 World Cup but the Group B encounter is surrounded by political issues as well, with a “very strange” pre-game press conference highlighting the tensions between the nations.

In the build-up to Tuesday’s game, in which the winning side will progress to the knockout stages in Qatar, the US Soccer Federation moved to show support for women in Iran by not using the flag of the Islamic Republic of Iran on social media posts.

There have been protests in Iran sparked by the death of 22-year-old Mahsa Amini, who died in custody after she was arrested by the country’s so-called morality police for failing to wear her head scarf properly.

Iran’s football federation had complained to FIFA about the US using an Iranian flag without the Islamic script and emblem which were added in 1980.

The US federation said it “wanted to show support for the women in Iran fighting for basic human rights”.

The social media posts now show the flag of the Islamic Republic of Iran, however, Qatar organisers have been preventing Iranian fans from displaying any old Iranian flags or signs and T-shirts with the “Woman Life Freedom” slogan of the protesters at World Cup games.

Women have effectively been banned from attending men’s football matches in Iran for the past 43 years.

“It was a very strange press conference in lots of ways. There was a definite political undercurrent throughout. Lots of things going on in the room, lots of people taking videos, not just of the main protagonists but from journalists around the room, photographs as well.

“There was a lot of direct questioning as well. High on the agenda was questioning on the US Soccer Federation and their decision not to use the Islamic Republic of Iran flag on social media posts. Gregg Berhalter, the US coach, was asked about that. He said it had nothing to do with him or the players, they weren’t aware the US Soccer Federation had done that and that they were in full support of Iran and their people but for him the focus was very much on the football.

“Then there was a question to the USA captain Tyler Adams, it came from an Iran journalist, and he asked him about playing for a country where he says there is racism. He talked about Black Lives Matter as well.

“Carlos Queiroz was also asked a direct question about Jurgen Klinsmann [who criticised the culture of the Iran team after their win over Wales] but in fairness to him he didn’t want to be drawn on it. Both coaches throughout the course of the press conference were trying to put the focus back on the football rather than on the politics.

“Quieroz was asked about the Iranian flag as well and his response was he wants to put smiles on the people’s faces with this game. He tried to play it down and get the focus onto the football. Earlier in the week he had an altercation with a journalist where he talked about politics but there was none of that in this press conference. There was a lot of respect between the two coaches as well.

“They both know they need to win the game and they both come into it with a little bit of form having played well in their last game. Queiroz talked about his time in America at the inception of the MLS, he talked about the progress of the game, that it’s gone from soccer to football, he talked about the performances of the USA in their first two games – he thought they’d shown the most consistency in the group – and he knows it’s going to be a tough game.

“USA need to bring their best performance into this game and that was something they stressed throughout this press conference.

“It was all a little bit strange, we had applause for Queiroz when he came into the press conference from the same Iranian journalist who asked the question to Tyler Adams, there was applause midway through after a couple of questions and at the end as well. We look forward to the game now and hopefully the focus will be on the football.” 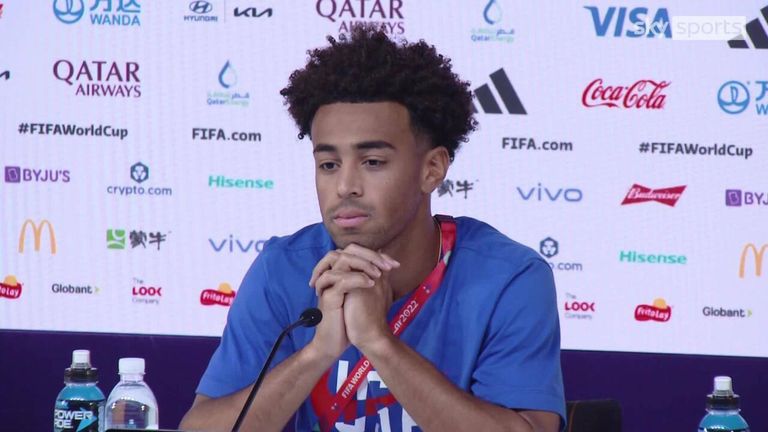 Question: First of all you say you support the Iranian people but you’re pronouncing our country’s name wrong, our country is named Iran, not ‘I-ran’ let’s get this clear. Second of all are you OK to be representing a country that has so much discrimination against Black people in its own borders? We saw the Black Lives Matter movement over the last few years. Are you OK to be representing the US meanwhile there is so much discrimination happening against Black people in America?

Answer: My apologies on the mispronunciation of your country. That being said, there’s discrimination everywhere you go. One thing I’ve learned, especially from living abroad in the past years and having to fit into different cultures and assimilate into diff cultures is that in the US we’re continuing to make progress every single day.

Growing up for me, I grew up in a white family with an obviously African-American heritage and background, so I had a little bit of different cultures and I was very easily able to assimilate into different cultures. Not everyone has that ease and ability to do that and obviously it takes longer to understand. Through education, it’s super important, like you just educated me now on the pronunciation of your country.

It’s a process. As long as you see progress that’s the most important thing.