Manchester United are close to agreeing a deal with Ajax for defender Lisandro Martinez.

Sky Sports News understands the structure of the payments in the deal are under discussion, with the defender wanting to join Erik Ten Hag’s squad this summer.

United have previously stated they will not overpay for the Ajax player. Sky Sports News revealed earlier this month that Martinez has informed Dutch club Ajax of his desire to move to the Premier League.

Arsenal were also interested in the Argentina international and while the Gunners’ playing style – along with the prospect of playing for Mikel Arteta – appealed to Martinez, he appears to have selected Old Trafford.

“Those numbers underline Martinez’s ability to play through opposition lines but he is similarly adept at switching the play and picking out team-mates over longer distances. At Ajax last season, no player averaged more successful long passes per 90 minutes.

“Voted Ajax’s player of the year for his role in their Eredivisie title triumph last season, Martinez stands at just 5ft 9ins, making him small for a centre-back.

“Last season at Ajax, he made more headed clearances (29) than any other player and won 79 of his 112 aerial duels, giving him a success rate of 71 per cent and putting him second only to Harry Maguire among Manchester United and Arsenal’s current centre-backs.

“Martinez can expect to face more exacting opponents in the Premier League, of course, but he is also helped by a sound reading of the game. He is known for anticipating strikers’ runs and positioning himself smartly to make tackles and interceptions.

“Those qualities, coupled with his versatility and technical prowess, make him all the more alluring to Premier League suitors.” 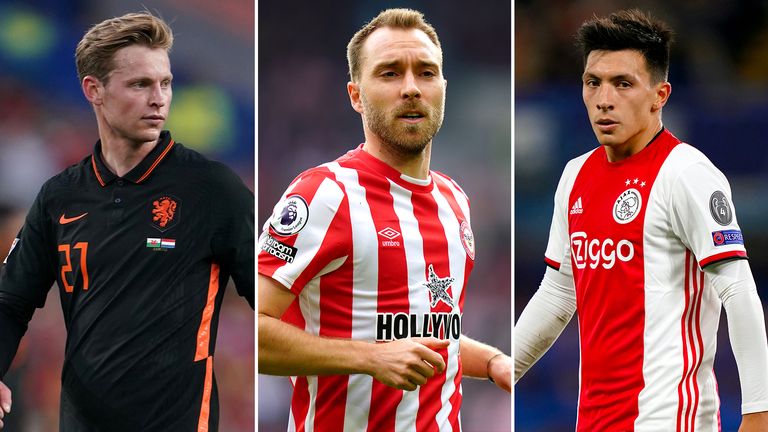 Manchester United remain comfortable in their position regarding a potential deal for Barcelona midfielder Frenkie de Jong, while the signing of Christian Eriksen is ‘progressing positively’.

United have a “broad agreement” with Barcelona on the fee – believed to be €65m (£56m) plus performance-related add-ons.

Chief executive Richard Arnold and football director John Murtough continue talks with Barca officials over the transfer, but the deal is problematic because De Jong has backdated wage issues. It is thought he is owed £17m after taking a pay cut during the pandemic.

United continue to insist that want-away striker Cristiano Ronaldo is not for sale.