The pre-match talk before the Monday Night Football clash surrounded fan protests outside Old Trafford, with the idea of a 73rd-minute walk-out devised by a group of fans.

But goals from Bruno Fernandes, a Cristiano Ronaldo penalty and Raphael Varane quashed talk of fan unrest in their final home game of the season – with the protest struggling to attract much traction.

On the pitch, United and Brentford produced a thrilling tie that saw both sides go full throttle with fast-paced attacks and high defensive lines – right from the very first whistle.

Brentford could have opened the scoring in the opening seconds. A slick kick-off routine saw Christian Eriksen play in Bryan Mbuemo down the right but a last-ditch challenge from Alex Telles denied the Bees forward. Then United got round the back of Brentford two times in quick succession. Diogo Dalot’s expert ball found Ronaldo through on goal, but the Portuguese forward then lost his footing and the chance fell away.

But Ronaldo’s Portuguese team-mate Fernandes eventually made amends. Anthony Elanga was released down the right and the Swedish attacker had the simple task of finding the midfielder in the penalty area to tap past David Raya. 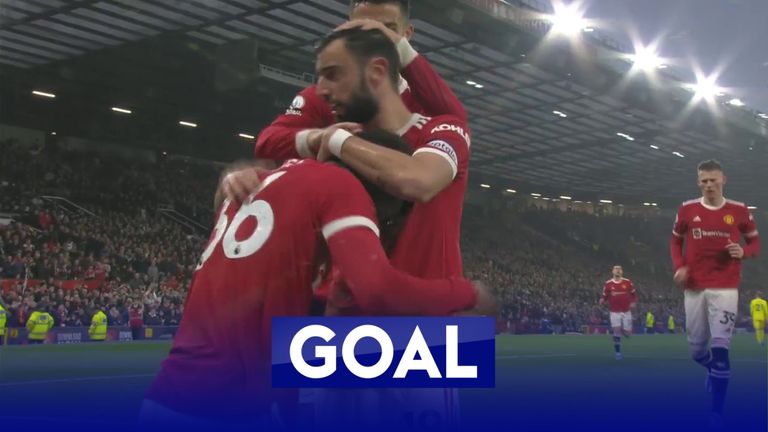 Bruno Fernandes opens the scoring against Brentford at Old Trafford.

Despite falling behind, Brentford responded well and there was no surprise that Eriksen was at the heart of their good play. The Danish midfielder tested David de Gea with a rasping drive, before crossing for Ivan Toney in the penalty area, but the Bees’ top scorer headed over when he should have done better.

Back came United and Ronaldo tried to take the game by the scruff of the neck. United’s No 7 had a penalty call turned away when he went down under Mads Roerslev’s challenge, before setting up Juan Mata who could only fire wide.

The same duo – with a combined age of 71 – linked up again just before the half-time whistle, with Ronaldo slotting past Raya after the seemingly-departing Mata raced down the left on a counter-attack. But VAR stepped in to keep the difference between the two teams to one, via a marginal offside call. 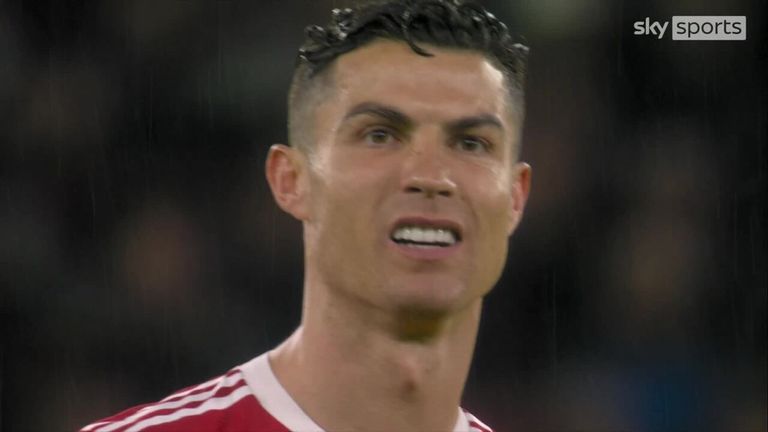 Cristiano Ronaldo thought he had doubled Manchester United’s lead against Brentford but VAR came to the visitors’ rescue.

The second period began in similar fashion, with clear-cut chances within the first four minutes. First, Toney fired over when found completely unmarked at the back post from Eriksen’s free-kick, before Dalot hit the bar after being played through by Ronaldo, who was flagged offside after the chance had gone.

The end to end saga continued. Brentford’s high line was once again exploited when Matic clipped the ball to Fernandes who ran through, but United’s goalscorer dragged his effort wide.

Then Eriksen’s swerving free-kick tested De Gea, who had to palm the effort away from down low. From a resulting corner, Toney was found in acres of space in the area but United’s goalkeeper kicked away his effort that was heading into the opposite corner.

Brentford were made to pay for their missed chances. Ronaldo refused to give up on a long ball forward and muscled Rico Henry off the ball, before winning a penalty off the Bees left-back.

After Fernandes missed against Arsenal last weekend, Ronaldo took penalty duties back in control to get the goal his endeavours on the night deserved. 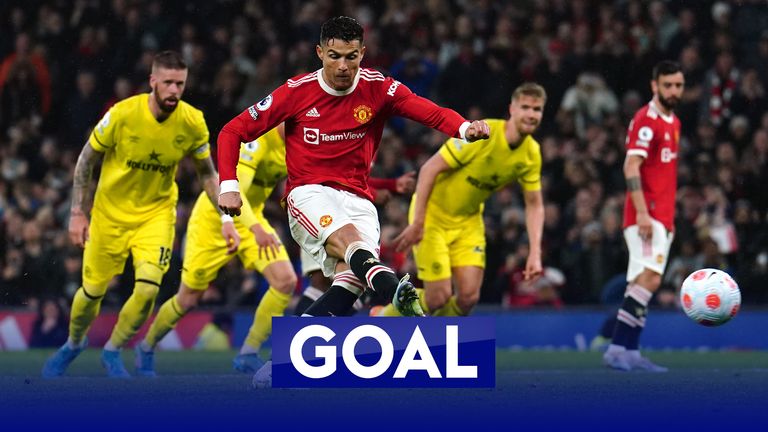 Cristiano Ronaldo doubles Manchester United’s lead against Brentford, after a confident finish from the penalty spot.

And it wasn’t long until United got their third through Varane, who struck home from a corner via a wicked deflection off Henry and past Raya.

That result-clinching third came just two minutes before the planned protest, with Old Trafford a very feel-good environment after a wretched season – as it closes its doors for the summer. 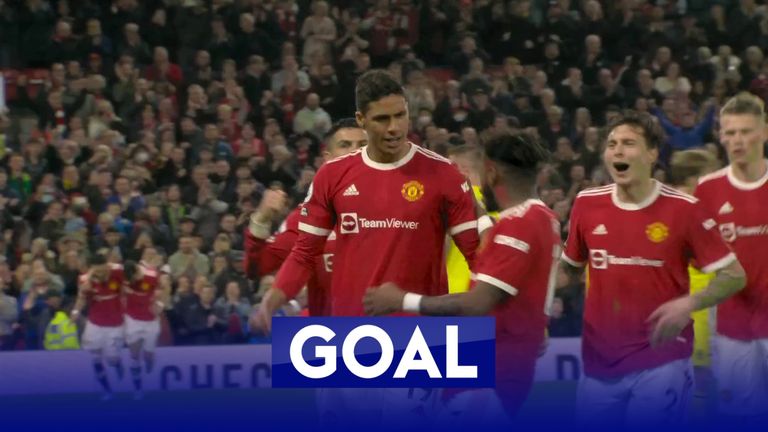 Raphael Varane gives United a 3-0 advantage against Brentford with his first ever goal for the club.

Manchester United will now end their season with two away trips. The first is away to Brighton on May 7, live on Sky Sports Premier League from 5pm, before their trip to Crystal Palace on the final matchday of the season.

Brentford host Southampton next weekend, before travelling to relegation-threatened Everton on May 15. Their last game of the season sees them host Jesse Marsch’s Leeds United in west London.