Erik ten Hag believes Manchester United looked better when Cristiano Ronaldo came on, although the forward could not inspire his side to a point against Brighton.

There had been plenty of pre-match speculation as to whether Ronaldo would be in Ten Hag’s first Premier League XI despite a series of run-ins throughout the summer.

The 37-year-old reportedly wants to leave the club in search of Champions League football and missed most of pre-season due to a family issue. Ronaldo played 40 minutes in a friendly against Rayo Vallecano last weekend, although was spotted leaving before the end of the match in a move Ten Hag deemed “unacceptable”.

Ronaldo was ultimately named on the bench for the start of the match, being introduced in the 53rd minute with Man Utd 2-0 behind to Brighton thanks to a Pascal Gross double.

Despite going on to lose the match – a scrappy Alexis Mac Allister own goal seeing Man Utd half the deficit to 2-1 – Ten Hag says Man Utd did look better with Ronaldo on the pitch as Christian Eriksen dropped deeper.

“You were hoping for more from Manchester United but it was the same shortcomings out of possession. Not good enough – giving away poor goals.

“But credit to Brighton, they were outstanding.

“Fred and McTominay are not good enough. They won’t get Manchester United back competing. We see it week in, week out.”

When asked by Sky Sports’ Emma Sanders if Ronaldo had the desired impact, Ten Hag said: “I think so. It was clear to see that the second half, we were better in midfield with Eriksen down and Ronaldo up.

“Then we created and Rashford had two really good chances. It’s a pity we didn’t score them for 2-2.

“It [Ronaldo’s fitness] takes time, you cannot force it. He has had one week of training so is a little bit more and he has to do more to get fit. This game will help him with 35/40 minutes. Now we have one week and he will be better next week.”

FREE TO WATCH: Highlights from Brighton’s win against Manchester United in the Premier League

While Ronaldo may have improved Man Utd in certain areas, there was plenty for Ten Hag to be concerned about as he lost his first Premier League game.

He explained: “It is definitely a setback, a real disappointment, but we have to deal with it. I knew from the start that it wouldn’t be easy, it’s a process and takes time, but we don’t have time. We have to win games and we should have done better.

“It was unnecessary. We gave too many easy balls away and the organisation was a big mistake. It was not the way we made it out, we made it clear how to deal with certain situations when we drop in. But that happens, we have to analyse and take the lessons from it.

“It [the challenges this season] are the same. I knew before it would not be easy to construct it, to build it, develop it and it takes time. I know we don’t have time, we have to deliver and we are aware of this situation.

“I said it in the dressing room that I saw it [togetherness] in the game. In the action in the second half, we were acting as one team, battling for a better result.

“It’s not that we didn’t battle or we didn’t have the right attitude, we made mistakes on the ball, passing mistakes, organisational mistakes and in defending.

“We have to [fix the mistakes quickly], but we also have to take the lessons and learn quickly from it.”

Manchester United captain Harry Maguire described the defeat to Brighton as a “nightmare start”, pointing to their first goal from Pascal Gross as the turning point.

He told Sky Sports: “It’s disappointing. It’s the worst possible start to be 2-0 down at half-time at Old Trafford. It’s not good enough.

“We huffed and puffed and got one back. We had chances to equalise but it’s a bad start for us.

“We actually started the game pretty well, on the front foot and controlled the game, then conceded the first goal which knocked us back really badly. We stopped playing from then, they got a lot of control in the game so we need to look at that first goal not setting us back as much as it did.

“But we’ve got to be better on the ball, we gave the ball away too much in that first half, especially after the first goal. We gave them encouragement to come forward and attack us. It was a nightmare start.” 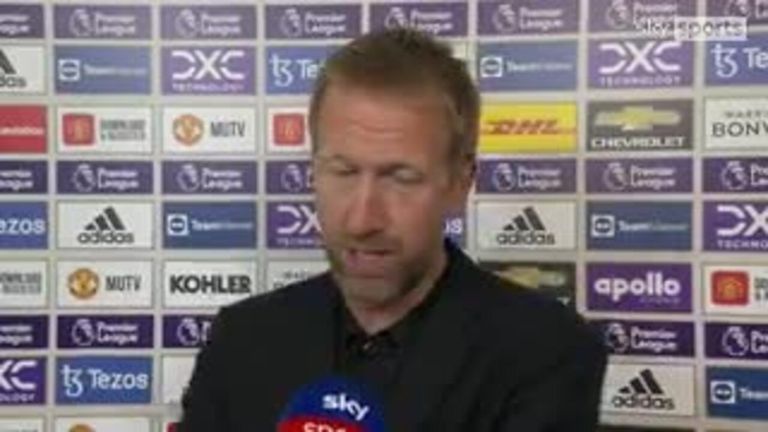 While much of the focus will be on Man Utd’s defeat, Brighton come away from Old Trafford with a vital three points and their first-ever victory at the ground.

It follows their impressive 4-0 win against Man Utd in May, with manager Graham Potter understandably pleased with how his side performed.

“It was a great performance,” he told Sky Sports. “It was a deserved win over the course of the game and a fantastic effort from the players so a fantastic start.

“We had an idea of how to attack and when we could, we tried to press and put them under pressure. We were positive, we were brave in what we tried to do and the boys gave it everything. It’s a difficult place to come with the quality they have and the crowd get behind them really quickly. Our performance first half was really strong.

“We managed it [the end of the game] quite well. They are going to put you under pressure and I thought we had a couple of chances to attack better to make it three when we could, but in the end, they came back.

“It’s a disappointing goal from our perspective, but the boys manged to hang in there and still caused some problems on the counter-attack. That gives us enough in the game, we didn’t just park on the edge of the box. I’m delighted with the boys and it’s a nice start for us.

“We’ve got a good group, it’s ambitious, they want to do their best. They’re not perfect, but they want to give everything and when you’re a coach, you’ve got a chance.

“We can’t ask for much more. Three points away from home against Manchester United. It’s a big win for us today.

“I would love to score more goals against other teams, but always against Man Utd. I don’t know why!

“We played really well. the game plan was really good and we stuck to it. We had our chances and were clinical in front of goal.”

“We’re just enjoying the fact it’s a historic win for us, so that’s something to be happy about. Three points in the Premier League is always difficult to get. The way we did it was good, but it’s only three points and we’ve got a tough game next weekend.”

Brighton will feel rightly aggrieved that they were not awarded a second-half penalty as United debutant Lisandro Martinez fouled Danny Welbeck in the area, but Potter was not quick to complain.

He added: “I’ve not seen it back, but the guys seem to think there was a chance of it. We had a few fouls that were waved away and you’re not going to get everything here, that’s just the way it is.

“We can’t complain too much. Those are the margins you need, we had enough on our side today and we’re happy with that.”

Jason Roy: Kevin Pietersen says England have to back 'best player' as opener struggles for form

How to Restart a Computer