Cristiano Ronaldo scored a spectacular hat-trick to take Manchester United up to fourth with a 3-2 win over Tottenham at Old Trafford.

Tottenham did well for much of the game, twice equalising thanks to Harry Kane’s penalty and, in the second half, through Harry Maguire’s own goal, but Ronaldo was the difference.

The result lifts Ralf Rangnick’s side up into the top four above Arsenal, while Antonio Conte’s Spurs are now five points behind them – albeit with two games in hand.

How Man Utd won it

Ronaldo’s first goal was truly sensational, arrowed into the net from well outside the penalty box to send Old Trafford wild – and perhaps send a message to his detractors.

Kane equalises from the spot 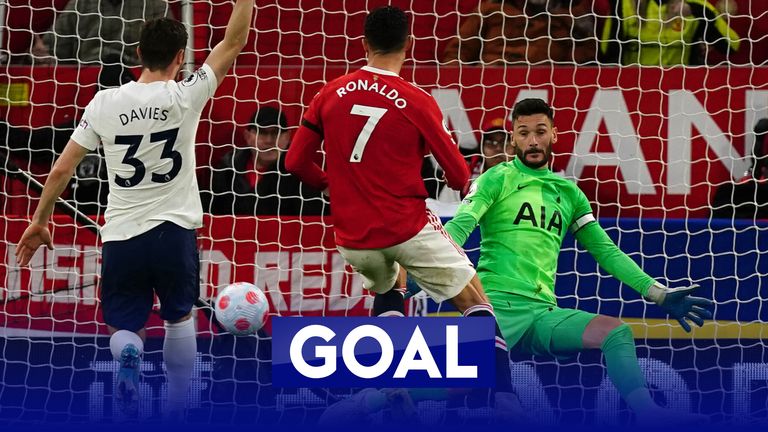 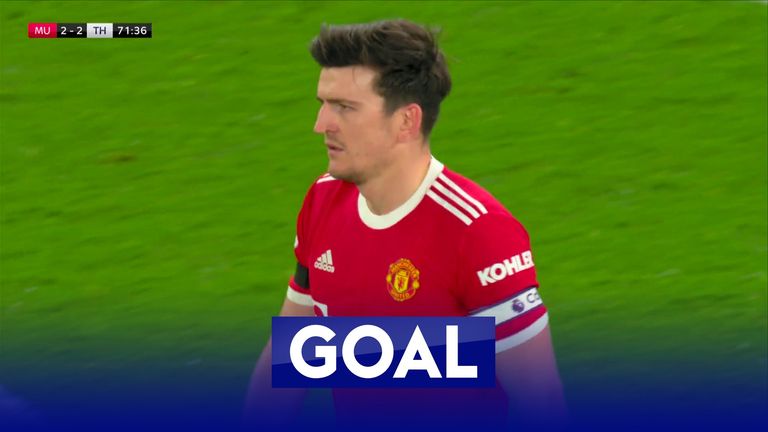 But Spurs pushed hard once behind, Ben Davies having a goal disallowed after being put in by Heung-Min Son and Eric Dier having a header cleared off the line by Diogo Dalot.

They found an equaliser when Dejan Kulusevski’s cross hit the stray hand of Alex Telles inside the penalty box and Kane fired emphatically past David de Gea from the spot.

It was no more than the away side deserved but their work was undone when Jadon Sancho raced in behind the defence and squared the ball for Ronaldo to score from close range.

Manchester United made five changes from the side that lost to City last Sunday with Bruno Fernandes ill and Cristiano Ronaldo returning to the starting line-up.

In defence, Diogo Dalot and Raphael Varane replaced Aaron Wan-Bissaka and Victor Lindelof. Nemanja Matic came in for the injured Scott McTominay in midfield, while Marcus Rashford was preferred to Anthony Elanga in attack.

There was just the one change for Tottenham as Sergio Reguilon replaced the injured Ryan Sessegnon having done so particularly effectively in the 5-0 win over Everton on Monday.

The game settled into a pattern in the second half with Spurs probing – Son going close when directing his shot just wide of the post – and United playing on the counter-attack.

Man of the match: Cristiano Ronaldo.

Conte’s team were rewarded with their second equalising goal of the game when Son fed Sergio Reguilon and Maguire only managed to divert the cross past his own goalkeeper.

But Ronaldo had the final say – his towering header from Telles’ right-wing corner finding the back of the net, before he took the acclaim of his adoring crowd yet again.

Whether Ronaldo was injured or dropped for the defeat to Manchester City, what is not a matter of debate is the impact that he is still capable of having in big games at 37 years old. In a match of small margins, it was his presence that made the difference.

There was a hint of anger in the shot that opened the scoring having been denied an appeal for handball moments earlier, but the ball was hit hard and true like few can. Backing off Ronaldo within shooting range? It was a huge mistake by Spurs and they paid for it.

Cristiano Ronaldo scored his first Premier League hat-trick in 14 years and 59 days, the longest gap between trebles in the competition’s history

That was vintage Ronaldo and the second showcased the other part of his game, that ability to sniff out opportunities. He was in the right place to beat Hugo Lloris again once Sancho had broken the offside trap thanks to Reguilon’s right boot.

It would not have been a Ronaldo masterclass without a header and he duly delivered – eluding Cristian Romero and outjumping Matt Doherty to win the game. He might not be the player he once was but he hid that well here. Astonishing. Viva Ronaldo, indeed.

Both coaches pay homage to Ronaldo

“It was an amazing performance,” said Conte. “Unfortunately, I know him very well. We are talking about a player who, along with [Lionel] Messi, is the best of this era. He is decisive and in the moments when the team needs him, he is always present.

“I remember also in the Champions League group for Manchester United, he was decisive. He is a player who feels this type of game. When he feels the blood, he becomes Cristiano Ronaldo. A fantastic player, I repeat.”

Rangnick, meanwhile, felt there was more to Ronaldo’s evening than just the goals. “He made the difference for sure with his three goals but not only with his three goals, I think that was his best performance since I arrived, on and off the ball,” he said.

Did that off-the-ball effort prove he was still capable of a pressing game? “Today, for sure. We have to be honest and say that he has not always done that in recent weeks and months. He showed that he is physically at that level and that is important.

“We were just joking, maybe it makes sense for him to go to Portugal for a few days and not train until Thursday. Maybe we need to do that until the end of the season.” 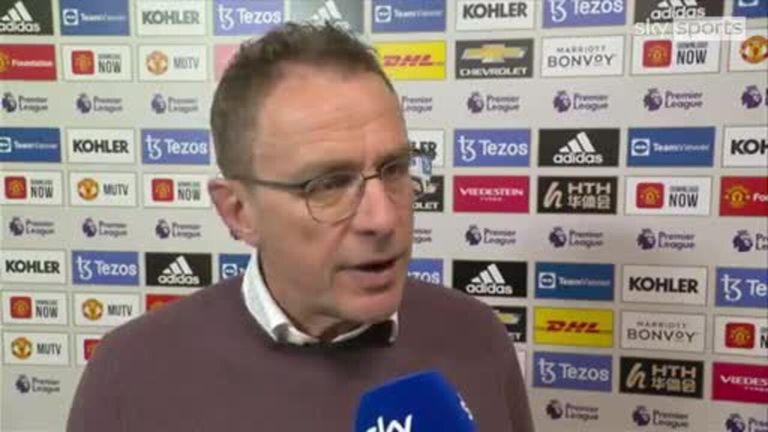 “I think the whole team showed the reaction expected after a poor second half at the Etihad,” said the Manchester United interim boss in his press conference. “I think coming back after two equalisers also showed the mentality of the team today.

“Before we left the locker room I said to the team, today is the best possible day, venue and opponent. It was the only answer we could give. The way we played in the second half there was not Manchester United like and that was exactly the reaction we needed to show.”

Conte calls for time and patience

“We have to try to improve with experience, to manage the game,” said Conte afterwards. “And the game is not one game, there are many parts of the game. There are moments to push high, go strong, push to win duels, and moments to keep possession, be calm.

“We are drawing and after one minute we conceded a goal. We draw 2-2 and then we concede a goal on set pieces. But we are working on this. It is not that we are not working. They need time to improve. You can see that improvement on the pitch. But it is a process, you need time and patience.”

Manchester United will return to Champions League action on Tuesday March 15 at 8pm as they host Atletico Madrid for the second leg of their last-16 tie. Their Premier League game against Liverpool on Sunday March 20 has been postponed, meaning the next domestic game for Ralf Rangnick’s side will be played against Leicester on Saturday April 2 at 5.30pm.

Tottenham are next scheduled to play in the Premier League on Wednesday March 16 at 7.30pm against Brighton.

Why You Should Delete Emails Instead of Archiving Them