Wycombe battled into the Sky Bet League One play-off final as they held off an MK Dons comeback to seal their passage with a 2-1 aggregate win.

Leading 2-0 from the first leg at Adams Park, MK largely dominated proceedings on Sunday night, and got a goal back through Troy Parrott midway through the first half.

But they could not find a way to level things up, and it’s Wycombe who go on to Wembley, where they will face Sheffield Wednesday or Sunderland on May 21 for a spot in the Championship.

Wycombe hold on to reach Wembley

MK Dons boss Liam Manning made two changes from the first leg, and one of those he brought in, Hiram Boateng, was the man who created the goal that brought them back into the tie on 26 minutes, as his lifted pass found the head of Parrott, who looped a brilliant effort over the helpless David Stockdale and into the net. 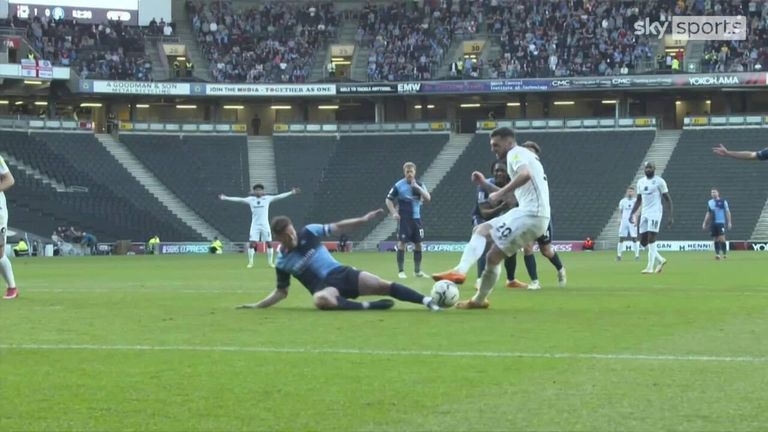 Joe Jacobson made an incredible goal-saving challenge for Wycombe

MK continued to push in the second half and would have found the equaliser in the tie were it not for a brilliant challenge from Joe Jacobson to deny Parrott when he was through on goal, and then for Stockdale to make a great save to push away a Theo Corbeanu effort.

But Wycombe showed the resilience of a side who have been there and done it before – having sealed their passage through the play-offs previously in 2020 – as they battled through to reach the final.

Wycombe’s Gareth Ainsworth: “It’s relief! MK Dons were fabulous tonight, they really were. They played, they rotated, but my boys were so resolute it was unbelievable. From back to front they stood up. It was about defending crosses, shots, set-pieces, the boys were fantastic. David had to make some great saves, but all goalkeepers do.

“It’s not good for your health this, I’ll tell you! But the fans were phenomenal, brilliant all game. I’m so proud to be taking Wycombe to Wembley.

“For every fan who never saw a Championship ball kicked, or the play-offs two years ago, get yourself to Wembley because this is the celebration. We’re still little Wycombe, but these boys can achieve anything.”

Man of the Match – David Stockdale

A masterful goalkeeping display at the age of 36. The last line of defence whenever the backline got breached in front of him, Stockdale made some key saves and managed his area superbly. A top-notch performance.

The Sky Bet League One play-off final takes place at Wembley on Saturday, May 21. Kick-off is at 3pm and it’s live on Sky Sports Football.