Frankie Dettori weaved some of his old magic as he guided Mimikyu (13/2) from last to first in taking the Group Two Park Hill Stakes at Doncaster for John & Thady Gosden.

A very well-backed runner throughout the afternoon, Dettori opted to settle the three-year-old at the rear of the field after she had run very keenly at York last month.

That looked to work out perfectly as she worked a passage through beaten rivals on testing ground, before edging past favourite Eshaada and Jim Crowley who battled back but had to settle for second beaten just under three lengths at the line.

John Gosden hints a run in France or on Champions Day at Ascot is in the pipeline for emphatic Park Hill Stakes winner Mimikyu.

Finishing in wide-margin distances, Believe In Love took third for Roger Varian with Yesyes further back in fourth.

John Gosden spoke to Sky Sports Racing after the race and highlighted two potential options for his mare, including a Group One target at Ascot on Champions Day.

“She’s in two races, the Prix Royallieu which is over one mile and six furlongs on the Saturday of Arc weekend or we could go for the Group One on Champions Day,” said Gosden.

“Funnily enough, her sister Journey won that race as well.”

The Group Two Cazoo May Hill Stakes featured a massive shock with Polly Pott (40/1) taking the prize for trainer Harry Dunlop, set to retire at the end of the season, and jockey Danny Tudhope.

The Muharrar filly – rated 75 before the race – had rattled off three successive victories in nursery but took a huge step forward to land Group Two honours in fine style.

She was settled in the rear by Tudhope, and as horses up front started to fall back including hot favourite Dance In The Grass, Polly Pott scythed through the field and eventually took it up with a furlong to run, winning by a length-and-a-half at the line.

Novakai was back in second for the Burke and Atzeni combo who enjoyed a terrific afternoon, with 50/1 shot Perfect Prophet back in third. Favourite Dance In The Grass was a well-beaten seventh of the eight runners.

An emotional Harry Dunlop spoke to Sky Sports Racing after the race but ruled out any U-turn on his decision to retire from the training ranks.

“She’s a lovely filly and really tough, it’s a fantastic result really. It’s a bit crazy really but a lot of these are maiden winners and some of them can come unstuck,” Dunlop said. 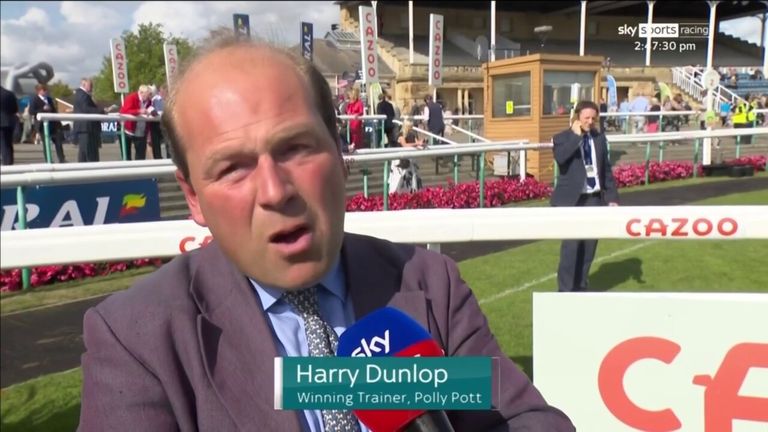 Harry Dunlop enjoyed an emotional victory at Doncaster in the May Hill with Polly Pott, having announced he will retire at the end of the season.

“You’ve got to stay a mile and it’s become soft ground with the rain yesterday but what this filly has is she’s tough and hardy.

“It shouldn’t do! I think I’ll look an idiot if I change my mind. To be honest with you, I hope wherever she goes she can continue to improve.

“It’s a difficult thing but people are more interested in more now that I’m retiring than when I was training!”

In a stirring finish to the Weatherbys Scientific £300,000 2-Y-O Stakes, Cold Case (11/4f) got the better of Alpha Capture by a nose under Andrea Atzeni for the Karl Burke team.

The first two at the line were always at the front of the field, with nothing else really looked likely getting into contention.

And as they battled it out with two furlongs to run, Tom Marquand’s mount took a slender lead but the winner fought back and got the verdict in a photo finish.

A delighted Atzeni said after the race: “He’s a very consistent horse. He did it the hard way, jumped and made all. Carrying top weight is never easy but when I let him down he kept galloping all the way to the line.

“He just got lonely in the last 50 yards but luckily he held on.

“I said to Karl [Burke] beforehand I’m not going to fight with him. I tried to take him back one day at Chester and he just ran a bit keen with me and didn’t finish the race off.

“He’s solid, a beautiful horse and will only get better with age.”

Bonny Angel (4/1f) got Ladies’ Day off to a blistering start, streaking clear to take the fillies’ nursery in stunning fashion for John Fahy and the Clive Cox team.

Always towards the front, the two-year-old quickened up impressively on the rain-softened ground, putting four lengths between herself and Coco Jamboo in second, with Misty Blues three lengths further back in third.

Cox felt a rise in grade could be in line for a move into graded company next time out, saying: “She’s always promised to be a nice filly at home and she ran in some nice races at Newbury to begin with. It’s just great when they are going the right way.

“The extra half a furlong helped today…this filly is just getting the hang of things and its wonderful to see that progress.

“I think she’s doing everything nice and she’s coming to the boil now.”