Rangers boss Giovanni van Bronckhorst says his side are ready to compete with the best teams in Europe after they reached the Champions League group stage for the first time in more than a decade after securing a 1-0 victory (3-2 on aggregate) against PSV Eindhoven.

Antonio Colak’s strike in the 60th minute proved decisive as Van Bronckhorst’s side booked their place in the competition proper for the first time since 2010, and the Rangers boss said the moment came close to being the best of his career.

“A very proud moment because I know what it means for everyone involved to be playing at the highest level against the best teams,” he said.

“We’re here to compete. We want to compete with the best teams in Europe. It will be difficult but it’s an experience I will love.”

When is the Champions league group stage draw?

The draw takes place at 5pm in Istanbul on Thursday.

Much of the build-up to the second leg was dominated by the omission of Rangers striker Alfredo Morelos, who was left in Glasgow because of concerns over his fitness levels and attitude, but it was Rangers’ new forward – scorer of the goals for Malmo that ended the Scots’ Champions League hopes last season – who grabbed the headlines.

Colak’s fifth goal of the season, created by Malik Tillman’s pressing, sealed their passage into Thursday’s draw, where they will join Celtic.

Meanwhile, PSV’s defeat sees them drop into the Europa League.

Back in the big time…

Rangers and Celtic will be in Thursday’s Champions League draw for the first time since 2007/08.

How Rangers returned to the Champions League…

Van Bronckhorst revealed a request for the kick-off to be put back after PSV fans had surrounded Rangers’ team bus and delayed them getting into the ground was rebuffed, and it was the raucous home fans that enjoyed the early stages as the Dutch side took control early in the game.

PSV came back to life, however, and captain Luuk de Jong just missed a cross from Jordan Teze 10 yards from goal before the unmarked Ibrahim Sangare head a Cody Gakpo corner over the bar.

Most of the pre-match discussion and debate was about the absence of Alfredo Morelos but in-form Colak, who has been keeping the Colombia striker on the bench, led the line again.

The visitors showed one change from the first leg with midfielder Glen Kamara in for Steve Davis.

Rangers were hanging on heading towards the interval. Three minutes from the break De Jong got away from defender Connor Goldson but his close-range effort was well saved by Jon McLaughlin and just moments later Gakpo fired over the bar from 16 yards with the keeper well off his line.

Xavi Simons replaced the injured De Jong for the start of the second half and the home side resumed control.

Rangers struggled to break free but when they did in the 55th minute Tom Lawrence cracked the crossbar with a thunderous 20-yard drive and Rangers came again moments later with even greater effect.

Man of the match: Antonio Colak.

When Tillman robbed the dithering Andre Ramalho inside the PSV box after the defender had taken a risky pass from keeper Benitez, he had the easiest of tasks to roll the ball to Colak to knock into an empty net.

PSV roared back with increasing desperation but after a Rangers break Benitez was forced into a good save from Tillman’s drive.

Rangers had to defend for their lives in the final stages and Philipp Max missed the target with a drive while McLaughlin made a brilliant save from Gakpo to help the visitors see out the nervy ending and get back among the big boys of European football.

“I would like to warmly congratulate everyone connected with Rangers on reaching the UEFA Champions League group stages.

“Rangers were worthy winners over the two matches against PSV Eindhoven, and the players and coaching team deserve enormous praise for how well they have performed in European competitions in recent times.

“It is great to have two Scottish clubs back in the Champions League group stages in Rangers and Celtic for the first time since 2007/8 and it will be a real benefit to the country’s UEFA coefficient.

“I would also like to wish the very best of luck to Heart of Midlothian ahead of the club’s UEFA Europa League play-off second leg against FC Zurich tomorrow.”

Gio on Rangers’ return: ‘It’s taken a lot of work from a lot of people’

“It comes really close to being the best moment [of my career] because of where Rangers have come from. Ten years ago, we were at our lowest point and it has taken a lot of work, energy and time from a lot of people to build the club back to this level.

“Seville [last season’s Europa League final] was a proud moment to compete for the second European trophy in Rangers’ history and today we have the same moment to be in the draw for the Champions League.

“We’re here to compete. We want to compete with the best teams in Europe. It will be difficult but it’s an experience I will love.”

Colak: ‘It’s an amazing journey; I was in tears’

“It’s difficult to describe in words it was a great team performance. It’s an amazing journey we’ll have this year and I’m so proud of all of these guys.

“I was in tears on the pitch, it was just a moment of joy. As a kid I always wanted to compete at this level and to be here is amazing.”

“The scenes at the side of the pitch at the final whistle from Van Bronckhorst and his staff, they know how big this is. It is huge for Rangers Football Club.

“It was a fantastic performance Antonio Colak – the man who knocked them out 12 months ago scored the goal that has seen Rangers return to the Champions League. 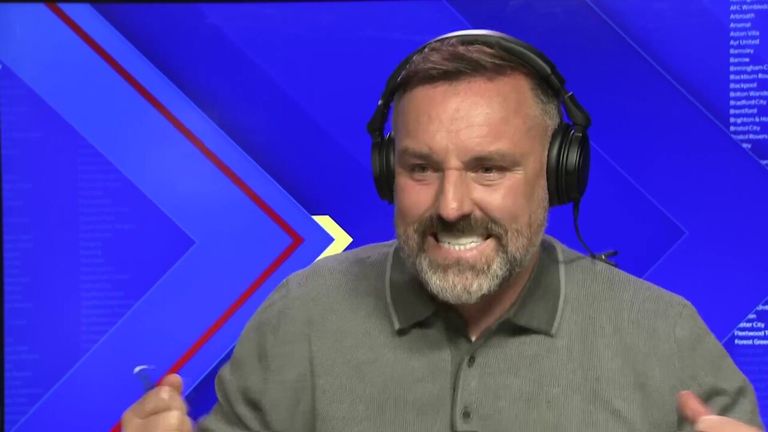 “We’ll have two Scottish sides in the Champions League for the first time since 2007.

“This is an unbelievable result for Rangers in the Netherlands. The jubilant scenes will continue and the disappointment of dropping points at Hibs at the weekend will be well and truly forgotten about.

“Everything coming into this game was about Alfredo Morelos. He’s been forgotten about and the man who is in charge of that central role for Rangers is the man who got the goal to get the club back in the Champions League.”

What’s next for Rangers?

All eyes will be on the Thursday’s group stage draw.

It will take place from 5pm (BST) on Thursday, August 25 and is being held in Istanbul, Turkey.

In terms of football, Rangers return to Ibrox on Saturday where they will face Ross County; kick off 3pm.

As LAPD cracks down on street takeovers, a look inside a tow yard where vehicles are taken