QPR leapfrogged Reading and moved level on points with leaders Sheffield United and second-placed Norwich by coming from behind to beat the Royals 2-1 at Loftus Road.

Mick Beale’s men fell behind to an Andy Carroll penalty (30) shortly after they had controversially been denied one of their own when Sam Hutchinson’s blatant handball was not spotted by the officials.

Parity was restored inside three minutes, however, when Dykes stooped to power a diving header past former QPR goalkeeper Joe Lumley – his first goal since August 6 (33).

And, despite a slow start to the second half from the hosts, the Scotland striker scored a cool late penalty (84), following a clumsy challenge from Mamadou Loum, to secure a fourth win in five Championship matches for Rangers.

Reading could have moved top of the Championship with victory, but instead, Paul Ince’s men drop to fourth ahead of the remainder of the weekend’s action.

How Dykes ended his goal drought to lift Rangers 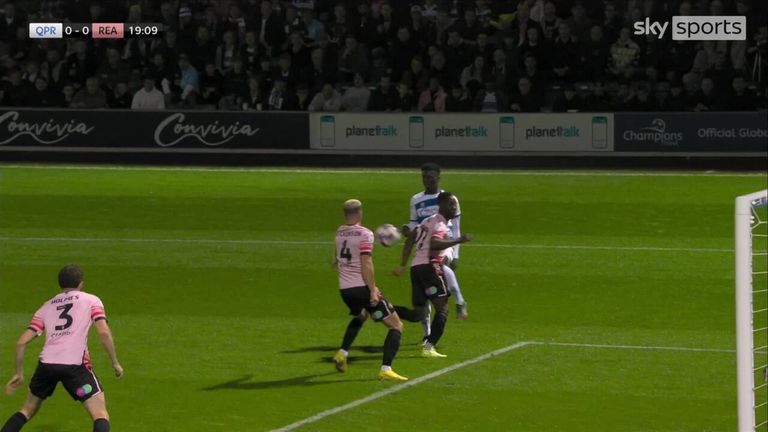 QPR’s appeals for a penalty were waved away despite Reading’s Sam Hutchinson appearing to handle the ball in the area.

A high tempo, open first 10 minutes or so in west London soon gave way to great intensity from QPR, who fired warning shots when Ilias Chair dragged a shot wide after a menacing run and Tyler Roberts drew a good low stop from ex-Hoop Lumley. 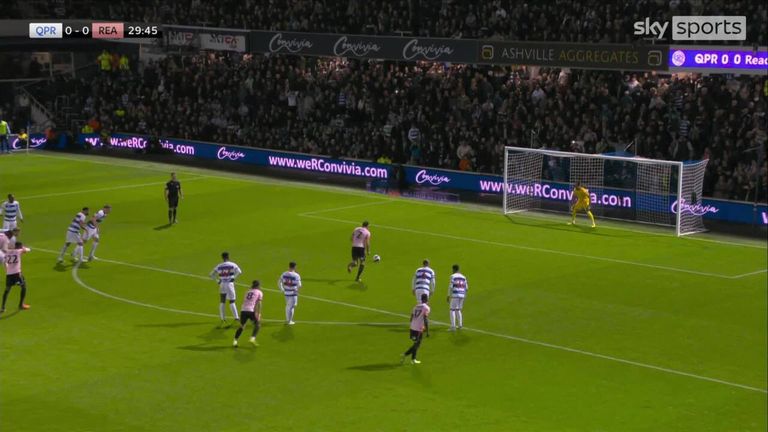 Reading took the lead against QPR in the Sky Bet Championship from the penalty spot after a foul on Lucas Joao with Andy Carroll converting the spot kick.

The hosts should, without doubt, have been given a penalty after 19 minutes. Chair caressed a ball over to Tim Iroegbunam at the far post, with his header put behind for a corner by a blatant handball from Reading defender Hutchinson. The officials, however, were unmoved.

In a cruel twist of fate, on the half-hour, the Royals took the lead from the spot, against the run of play. Iroegbunam brought down Lucas Joao just inside the area, with Carroll placing the ball on the spot and emphatically planting the ball out of Seny Dieng’s reach. 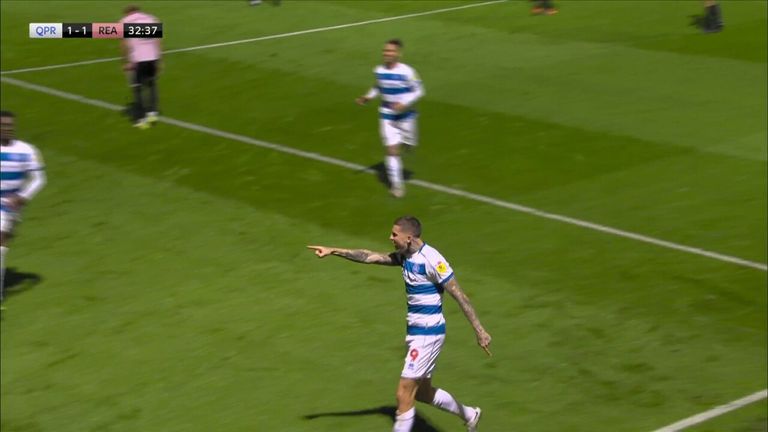 QPR hit back immediately after going behind to Reading with Lyndon Dykes heading them level.

But justice was served inside less than 180 seconds, when substitute Osman Kakay – who replaced the hamstrung Ethan Laird after just 26 minutes – delivered a wicked cross in from the right that Dykes expertly guided past Lumley.

The pendulum swung in Reading’s direction in the second half as they pinned Rangers back, which meant Lumley had to be fully alert to push away a Roberts header from point-blank range and to then get a strong hand on a powerful shot from Chair soon after. 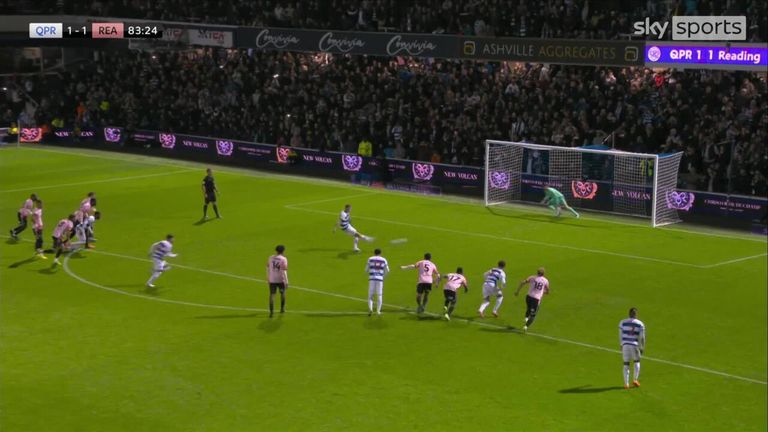 QPR were awarded a late penalty in their Sky Bet Championship clash with Reading and Lyndon Dykes made no mistake in converting the spot kick.

The rhythm of the game was then broken up by a succession of changes but, inside the final 10 minutes, QPR found a way to lead for the first time.

Loum mindlessly brought down Iroegbunam in the box, with no obvious intention to play the ball, and after referee Thomas Bramall pointed to the spot, Dykes kept his cool to tuck his penalty into the bottom right corner and seal victory late on.

Player of the match – Lyndon Dykes

The striker marked his 27th birthday in style with his first goals in two months, which helped QPR to cement their place as promotion contenders ahead of a busy month before the break for the World Cup.

He took his chance with Chris Willock sidelined through injury, scoring two from three shots and just three touches of the ball in the opposition penalty area. 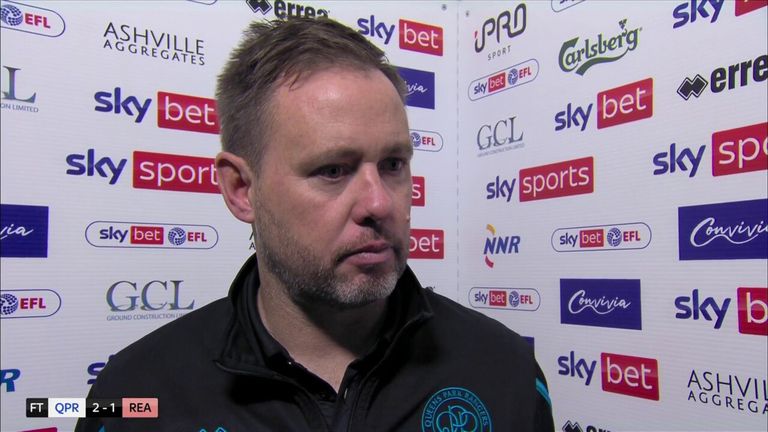 QPR head coach Mike Beale says he’s working with a special group of players, but they won’t start looking too far ahead.

QPR’s Mick Beale: “It’s been a fantastic week. A really tough one when you look at the fixtures: away to Bristol City and away to Sheffield United. We’re really delighted with the nine points. It has been a big win for the group in terms of belief, but there are a lot of games to go.

“Lyndon has been fantastic this season for the team in terms of his effort and his energy. He actually apologised to me on Tuesday for missing a big chance at 1-0 and I told him not to because he gives his team-mates everything every day. He’s a great lad, he works hard and the goals were coming. That’s what we have to say to him and he has to take that on board. Tonight, I thought he was excellent and he deserved it.” 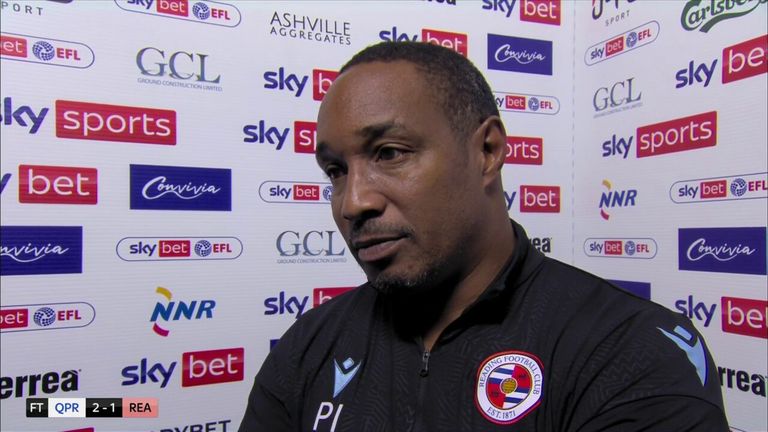 Reading manager Paul Ince admits his side have been brought back down to earth after conceding a late penalty in the 2-1 defeat to QPR.

Reading’s Paul Ince: “I thought, in the first half, we didn’t really have the belief that we could go and actually win the game. I think we gave QPR too much control, we didn’t press the way we normally press, tried to set traps for them and we looked leggy. I had a few words to say at half-time – in the nicest possible way!

“In the second half, we came out and looked the best team. We looked more dangerous and you always thought it was going to be a 1-1 draw. You end up losing the game and you think it’s never a 2-1 game, it’s a 1-1 game. We’re disappointed to come out without anything.”

Both teams are back in action on Saturday October 15. QPR travel to Kenilworth Road to take on Luton at 12.30pm, while at 3pm, Reading host West Brom at the Select Car Leasing Stadium.

Who performed the first Super Bowl Halftime Show? A brief history of the world’s most watched concert