Ralf Rangnick criticised Manchester United’s continued profligacy in front of goal after a home stalemate at home to Watford hit their top-four hopes.

Despite racking up an expected goals tally of almost 2.5, registering 22 shots and three ‘clear-cut chances’, United failed to find a way past former goalkeeper Ben Foster in the Watford goal, three days after the Hornets had conceded four times at home to mid-table Crystal Palace.

“It feels once again like two points dropped that we should have easily won,” he said. “I think we did everything apart from scoring. We had in both halves enough chances to win that game. But we didn’t, and that’s why we, not for the first time, dropped two important points in a very important game.

“In the first half we had four clear opportunities that normally are enough to score at least one or two goals, and in the second half it was similar.

FREE TO WATCH: Highlights from Manchester United’s draw with Watford in the Premier League.

“In the end it’s about efficiency, about being clinical in front of goal, and this is not for the first time unfortunately.

Asked why good players were not taking chances, Rangnick said: “It is difficult to say. Our job as coaches and the head coach is to help the team create enough chances.

“If we only had two or three opportunities in the game, we could ask ourselves what can we do to create even more. But I think the number of clear chances we had today has to be enough to win a game like this.” 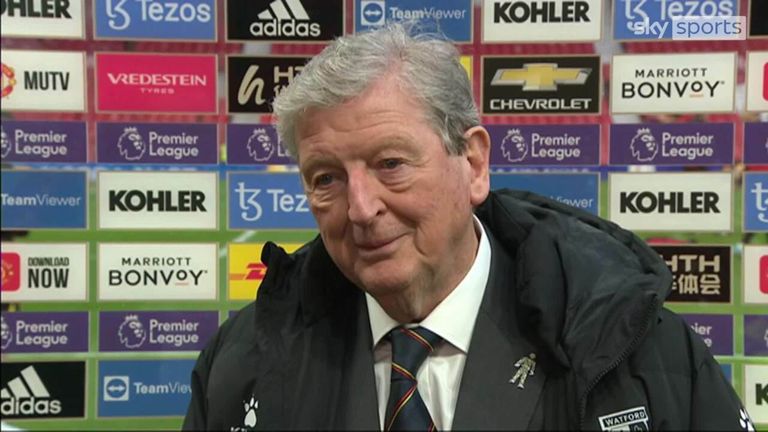 Watford manager Roy Hodgson was proud of the graft that his side showed in the 0-0 draw against Manchester United and the Hornets boss is going to savour a well-earned point.

Roy Hodgson continued his strong recent record at Old Trafford with Watford earning a hard-earned point, and managed 10 shots of their own as they put their Palace pummelling behind them to register a second straight clean sheet away from home.

He said: “How many teams come up here to Old Trafford in the bottom three and don’t find themselves under pressure? I thought we dealt with the pressure quite brilliantly.

“I thought our defending throughout was good from the front right the way through to the back, and I thought at the end of the day the hard work of the players and the determination and desire they showed means we go away from here with a very good point.”