Red Star were unbeaten in this season’s Europa League before this game and their last defeat in any competition came back in November, but it was Rangers who raced into the lead.

James Tavernier converted from the penalty spot after Ryan Kent was fouled on the edge of the box.

Alfredo Morelos doubled the lead before half-time and Leon Balogun then added a third, heading in from Tavernier’s corner.

The Serbian side had three goals disallowed for offside and Rangers goalkeeper Allan McGregor pulled off a fine save to deny Aleksandar Katai from the penalty spot after Ryan Jack was punished for a pull on Mirko Ivanic.

Katai had put the ball in the net twice in the first half, only to be thwarted by the offside flag, but he and his team-mates were again left shaking their heads in the 51st minute when defender Leon Balogun, back in for Borna Barisic, powered in a header from a Tavernier corner.

The Scottish champions continued to ride a second-half rollercoaster to the final whistle and can now look forward to the second leg next week at the Rajko Mitic Stadium, where the possibility of an appearance in the last eight of a European competition for the first time in 14 years beckons.

The Serbs, however, will feel sure they must enjoy better fortunes than they endured on a remarkable night in Glasgow.

Ibrox could hardly have witnessed a more exhilarating first half to a European tie.

The match began with, among other things, two early Gers goals, one from a controversial penalty, as well as a home penalty save.

Red Star midfielder Katai had the ball in the Rangers net from the edge of the area in the third minute but the offside flag was up.

A VAR check five by Dutch referee Serdar Gozubuyuk five minutes later puzzled most of the stadium, but there was a huge cheer from the Gers supporters when he pointed to the spot, judging Slavoljub Srnic to have clipped Ryan Kent as he drove into the box.

Tavernier, who had scored home and away from the spot against Borussia Dortmund in the play-offs, guided his penalty high past fellow captain Milan Borjan.

Two minutes later, as Red Star responded and Rangers hesitated, Katai again had the ball in the net, only to see the offside flag up once more.

Instead, Morelos slammed in a second at the other end when the ball broke to him 14 yards out after Ryan Jack’s cross into the area had been headed away by defender Strahinja Erakovic.

It was breathless stuff.

The visitors were awarded a penalty when Jack tugged Mirko Ivanic inside the area, but McGregor threw himself to his right to push away Katai’s well-struck shot.

It was all going the way of the Scottish champions and they could have added a third in the 41st minute, but midfielder Glen Kamara fired just over the bar from 12 yards after good work by Kent and defender Calvin Bassey.

The second half continued in the same manner, with play stretched as both sides pushed forward, and further bedlam ensured in the stand when Balogun’s thumping header from Tavernier’s corner flew past Borjan.

Opportunities for more goals presented themselves to Rangers as a frantic second half wore on, with defender Connor Goldson’s header cleared off the line by Aleksandar Dragovic in the 70th minute.

The visitors retained a sense of menace but their luck remained absent.

When Guelor Kanga beat McGregor with a swerving drive from 25 yards, the ball rebounded off the bar and the home side eventually emerged unscathed.

Red star substitute El Fardou Ben Nabouhane had the ball in the net in the 83rd minute, but he too was ruled offside and the Gers held out to take a major step towards the next round.

What the manager said 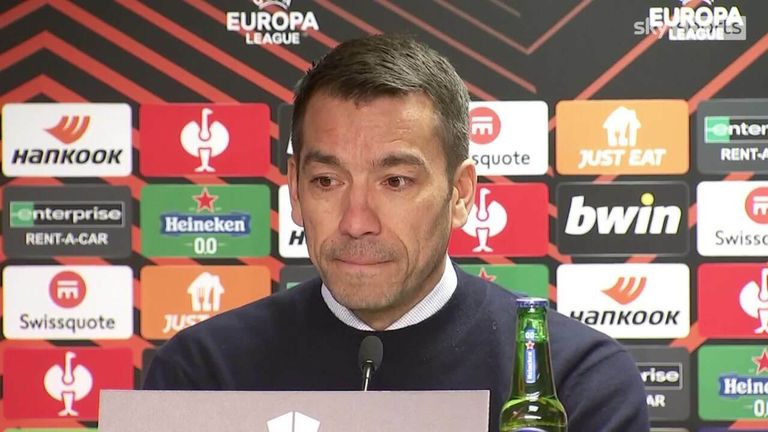 Rangers manager Giovanni Van Bronckhorst believes that the tie isn’t over yet after beating Crvena zvezda 3-0 in the first leg of the round of 16 in the Europa League.

Rangers boss Giovanni van Bronckhorst said the tie is far from over despite their convincing win.

“It was a tough and demanding game. There was so much happening throughout the whole game, but of course happy with the result.

“We played really well. If you’d seen the game you would think more goals were in it, also for them.

“We go to Belgrade next week, it is going to be hard, maybe harder than today, but we have a three goal difference to take with us, but this tie isn’t over yet.

“People talk about the Dortmund game, but that game is history now and we are playing against a new team. I think Red Star Belgrade are very strong, as I said before.”

What’s next for Rangers?

Why blackouts are dangerous to Ukraine’s nuclear sites