Sarina Wiegman says victory against the USA was a good measure for England’s progress, while Vlatko Andonovski “wouldn’t mind” facing the Lionesses in the World Cup final.

Friday’s friendly at Wembley was billed as a litmus test for Wiegman’s side after their Euro 2022 win, pitting them against the World Cup holders ahead of next summer’s tournament in Australia and New Zealand.

An enthralling match saw England win 2-1, and although the result will have little impact come July, Wiegman said England were using the match as a reset after the Euros to help the Lionesses heading in 2023.

“Actually, the whole women’s game is developing and that’s very exciting to be a part of. But then it’s good to have a test against the USA because they have won so many things over years and years so lots of respect for them, but hopefully we’re catching up. Again, it’s now October, it’s not July yet.

“We did a little better in the first half. The second half, we had more trouble to get behind and even get the ball in their half, but we kept playing football and there were long moments where we stayed in possession.

“That’s really good, that’s what we want and from our possession, we create chances and get in their half. That’s the next step that we do that more… It’s not all about possession, it’s about scoring more goals than the opponent, but we want to go forward from possession then get behind the defence to create chances. It was a very good match to see where we are now.

“We have proved ourselves. It started at the Arnold Clark Cup – I think it started before I even came in that England can beat anyone.

“But I think since what I’ve experience with this team, I think that the belief came a little more I’m the Arnold Clark Cup last year.

“In the Euros, we were really showed that we can beat anyone but it was still very close, very competitive games and a thin line for winning or losing.

“But we can bring up something that we can turn around games and win them against the best opponents and that’s what we showed again today. We showed ourselves that we can do it and that brings confidence.

“We have ten months [until the World Cup], we have next Tuesday [against the Czech Republic], then the November camp and the Arnold Clark Cup in April.

“We took this moment to take another starting point to really see where we are and then we take it from there. We’re going to try and add some more things to our game. We’re already in a pretty good place, but we need to improve a few things that we do already, but also want to add some things and see some more players too.”

As much as England were able to judge where they are, a young USA side also gained experience from facing the European champions as they prepare for their title defence in ten months’ time.

USA coach Andonovski was looking to create conditions his team will face in Australia and New Zealand, and praised the Lionesses as a team, plus the match overall at Wembley.

“It was a great event. Great for women’s football. I thought that the fans that came did an incredible job and I want to thank them for supporting. This game was a big game, but it was not a World Cup final. At World Cup finals a lot of people show up. But we’ve never seen a friendly game that has been supported as well.

“I thought tonight the fans made a statement. It was a great night. A very exciting game. Everything we expected from the opponent we pretty much saw it. They were very well organised, physical. They are obviously well-coached.

“That’s why we came here, to experience that. We have a fairly young squad that needed to experience this. They need to go through tough moments and hopefully learn from them.

“This game is important for preparation for the World Cup. There is a reason we played it so far out. We wanted to have enough time to fix the things that get exposed. It was a great learning opportunity. “It wasn’t perfect, but there is reason for cautious optimism following England’s latest conquest. The psychological edge that comes with beating such a powerhouse is alone a tangible triumph. Sarina Wiegman’s remarkable unbeaten run as manager lives on. Lionesses fans will hope that it never ends.

“US head coach Vlatko Andonovski was quoted as saying he “wouldn’t mind meeting [England] again in the final.” He was referring to the World Cup final. A clear indication of the growth this side has achieved under Wiegman. They have an air of legitimacy about them. As if onlookers now recognise and respect their pedigree. 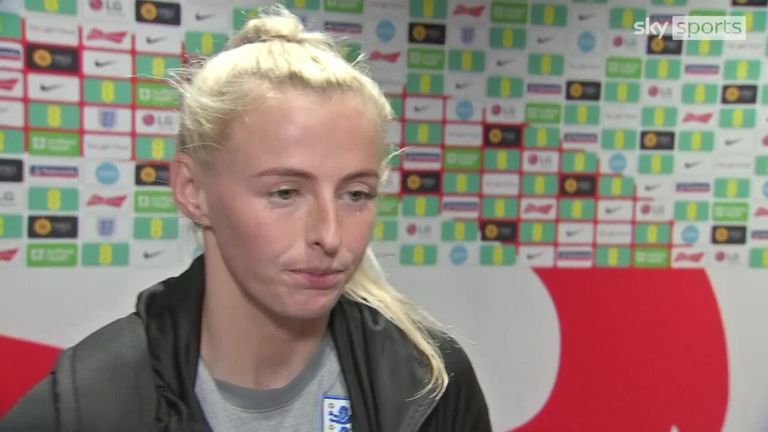 “Of course that is the upshot of winning a major tournament. But more than that, England are commanding acclaim based on the consistency of their delivery. They are a different animal under Wiegman. Ruthless, but also immensely difficult to beat.

“Even without captain Leah Williamson and chief goal threat Alessia Russo, they managed to find a way to overcome the USA. It was the first time they’ve managed it since 2017 – and only their third time ever in 19 attempts. The gap has certainly closed. Some may argue that it no longer exists.

“Needless to say, it was a poignant night for women’s football in a game that represented more than just 22 players on a pitch. The Lionesses rightly demonstrated their solidarity with the USA squad by wearing teal armbands, while also posing with a banner that read “protect the players” before kick-off. But there was no love loss after the whistle went. England had a point to prove. And they proved it expertly.”