Declan Rice ended his Premier League goal drought in style as West Ham played out an entertaining 1-1 draw with Southampton at St Mary’s.

But Hammers manager David Moyes hit out at the officials after the match, blaming referee Peter Bankes for Saints’ goal and telling VAR Simon Hooper he should have gone to Specsavers.

Moyes was angry Bankes allowed play to continue after he inadvertently blocked Jarrod Bowen from getting to the ball, allowing Romain Perraud to fire the hosts ahead via a deflection (20).

And Moyes was baffled as to why VAR did not give his side a penalty after a “judo move” from Perraud on Tomas Soucek.

Instead, it was left to Rice to deny Southampton boss Ralph Hasenhuttl a much-needed win as the West Ham captain’s precise strike into the far corner (64) – his first goal in the Premier League since October 31 last year – earned the visitors a draw.

“How have we not got three points?” Moyes said. “The real reason is the referee, the referee gets in the way of the ability for us to defend.

“The ball comes out and Jarrod Bowen goes to get the ball and the referee blocks Jarrod Bowen from getting to it and the boy scores from it.

“Ridiculous, it really is. Wait until you see the angles and the pictures and you will soon see how terrible it is that he allows it to go on. You can’t get in the way of somebody getting it and allowing it to go and it ends up as a goal.

“I asked him (Bankes) about it, but I spoke to him more about the penalty kick. The penalty kick on Tomas Soucek is a judo move by the player who is marking him.

“There must be new rules in football, so you should check out the new rules which are that you can grab them right around the waist and you can hold them and then you can put them in a judo move, where you slam them down.

“He gets him and throws him right down, it’s unreal. It’s not the referee, it is VAR. Whoever was on VAR today needs to go to Specsavers, I’ve got to say.”

Man of the match: Declan Rice.

West Ham headed to the south coast on a four-match winning streak in all competitions and looked dangerous throughout but, despite their relentless pressure late on, Moyes’ side could not find a winner.

An improved Southampton, who had lost four in a row and 15 of their previous 21 fixtures, deserved to lead at the break as they looked to ease some of the pressure on Hasenhuttl, but the stalemate means their wait for a first win since the end of August continues.

The result leaves Southampton in the relegation zone (18th), one point and position behind Wolves. West Ham move up to 12th.

How makeshift Hammers were held by Saints

West Ham arrived at St Mary’s with only one fit centre-half after Craig Dawson and Kurt Zouma were ruled out, with Thilo Kehrer in a back three alongside full-backs Aaron Cresswell and Ben Johnson.

However, their makeshift defence did not affect their ability to attack during an action-packed first half. The visitors went close through summer signings Gianluca Scamacca and Lucas Paqueta but failed to test Southampton goalkeeper Gavin Bazunu in the opening 45 minutes despite registering 10 shots in total.

Midfielders Declan Rice and Tomas Soucek both returned to the starting XI. Gianluca Scamacca was preferred to Said Benrahma up front.

The Hammers were without Craig Dawson through injury and Kurt Zouma who was unwell. Michail Antonio made the bench.

Southampton, meanwhile, hit the target seven times before the break as Che Adams and Mohamed Elyounoussi saw their efforts well saved by Lukasz Fabianski either side of Romain Perraud’s opener, a goal that was not without controversy.

First, West Ham felt Kyle Walker-Peters had stepped over the line when taking a throw-in during the build-up and then felt aggrieved when referee Peter Bankes got in the way of Jarrod Bowen as he tried to prevent the ball from reaching Perraud, who went on to score his first Premier League goal thanks to a deflection off Ben Johnson.

Southampton had to withstand a positive West Ham response and suffered a defensive blow minutes before the half-time whistle when centre-back Armel Bella-Kotchap dislocated a shoulder sliding in at the feet of Scamacca.

After the break, it was West Ham who started the better of the two sides and they registered their first shot on target when Paqueta forced Bazunu into his first notable save of the match from the edge of the area.

The equaliser was only a matter of time and it arrived in the 64th minute courtesy of captain Declan Rice. The England midfielder played a one-two with substitute Said Benrahma before bending a superb effort into the far corner from just inside the box – his first Premier League goal for nearly 12 months.

As they went in search of a winner, the Hammers had several penalty appeals turned down but almost came away empty-handed as Diallo’s long-range shot flew narrowly over and Fabianski saved from Edozie late on.

But a point was the least their second-half performance deserved. As for Southampton, the result ended their four-game losing run but there were notable boos from the home fans when the final whistle was blown.

Hasenhuttl: One point is not enough

Southampton manager Ralph Hasenhuttl: “One point is not enough. When you are in the lead and you give it away, it obviously feels not so good. To be honest, in the second half, we had big problems closing them down. We defended, I think, 20 set-pieces today against a very good set-piece team.

“We threw everything in but, footballing-wise, in the second half, we could have played much better. The first half was OK, but we sometimes need a second or third goal. The chances were there in the first half, definitely. But again, no clean sheet.

“We had to fight for this result and in the end, I think a draw was OK for both teams. It was not so easy then to stop them and we didn’t really have the lift from some counter-attacks from us. Especially after the equaliser, it was a little bit hectic. 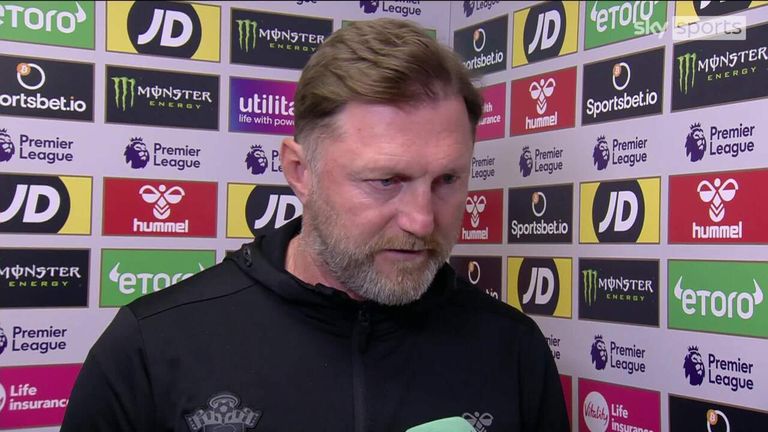 “We have to go to Bournemouth [on Wednesday] and make it better and play like we did in the first half. Then, hopefully, with more clinical finishes and a clean sheet, this is the chance for us, against a good, in-form team, to hopefully take the three points.”

On Bella-Kotchap’s shoulder injury, Hasenhuttl said: “It’s a dislocated shoulder. It can be anything from playing on Wednesday to eight weeks.

“If he is out, it would be as damaging as the injury to Tino Livramento or Romeo Lavia. He is an important player.”

You never know quite what to expect from Southampton. From an impressive win over Chelsea at the end of August to four defeats in a row, Ralph Hasenhuttl’s side are probably the most up-and-down team in the Premier League.

Defeat against Manchester City last weekend was expected, but losses to Everton, Aston Villa and Wolves before that saw the Saints drop into the relegation zone ahead of Sunday’s Premier League fixtures.

They welcomed West Ham to the south coast having lost 11 of their previous 15 matches in the league. The Hammers had won their past four in all competitions.

They may have been clinging on to a point against the Hammers in the end, but the Saints delivered a first-half performance their manager can be proud of. Only one of their seven shots on target during the opening 45 minutes beat Fabianski, but the hosts showed they have the ability and desire to turn their fortunes around.

However, how much more time the Austrian is given to inspire a revival remains to be seen. There were further boos from some of the home supporters at the final whistle, but he will take some comfort in knowing he has survived worse moments since taking charge in 2018. Two 9-0 defeats spring to mind.

It might seem strange to praise a forward who went close to scoring on at least four occasions but finished the game without a goal.

However, it is worth mentioning the impact Gianluca Scamacca has made on West Ham in recent weeks. It is no coincidence their season has got back on track just as the striker is finding his feet at his new club.

Goals in recent wins over Wolves and Fulham in the Premier League highlighted why West Ham invested £35.5m to sign the 23-year-old in the summer. Despite failing to find the back of the net at St Mary’s, he showed again what an asset he can be for David Moyes.

He was a constant thorn in Southampton’s side and had the football gods been with him on Sunday, he could have easily scored a hat-trick.

Scamacca’s performances have helped West Ham move away from the relegation zone and he will be confident this is just the start of a successful career in the Premier League. The Italian is one to watch.

Southampton are back in action on Wednesday when they travel along the south coast to the Vitality Stadium, where they take on Bournemouth (kick-off 7.30pm).

West Ham’s next game is on Wednesday, with David Moyes’ side heading to Anfield to take on Liverpool (kick-off 7.30pm).

The Hammers then return to the London Stadium to host Bournemouth on Monday Night Football on October 24 – live on Sky Sports (kick-off 8pm).