Expert tipster Simon Rowlands has two selections for day one of the 2022 Cazoo St Leger Festival at Doncaster on Wednesday, live on Sky Sports Racing.

Autumn has already arrived in the United Kingdom according to the meteorological calendar but comes in on the tail of the last horse in Saturday’s St Leger if you believe in racing folklore. I prefer the latter version, which means that Doncaster’s excellent four-day meeting is the last of this memorable summer.

It starts on Wednesday with a card that mixes Group races with all-aged sprints, and handicaps with a Legends race in which some of the jockeys are well into their 50s.

That Group race is the Japan Racing Association Sceptre Fillies’ Stakes (3.35), which has attracted a field of 11. The majority of them are useful, but it is not as open a race on my figures as suggested by the betting.

In particular, Novemba and Heredia stand out on form and should be a shade of odds on combined from where I am sitting. They have both disappointed a little in their most recent starts but are a class apart if you go back a bit further.

Novemba is a Classic winner – of last year’s German 1000 Guineas – and has mixed it with some really good sorts on most of her starts since, though to no avail, making most when fourth to Alcohol Free in the Coronation Stakes at Royal Ascot next time.

I expected her to do better than when third to Jumbly at this Group Three level back at Ascot last time, but she did herself no favours by starting slowly and then getting lit up on reaching the front. She tries seven furlongs for the first time in two years, and has easier ground than on her last two appearances, both of which promise to suit her.

Last but by no means least, Novemba is one of only two pace-forcers (Nectaris is the other) in a field in which everything else habitually comes from the back. She could take some catching under semi-regular rider Bauyrzhan Murzabayev. I would have her no bigger than 2/1.

I reckon both the two-year-olds taking on their elders in the Listed Scarbrough Stakes (4.10), Can To Can and Union Court, have live chances (especially the latter) in receipt of the overly generous age allowance, but not quite enough to make either of them a bet. Manaccan is a solid enough favourite.

The way I see it, Maximilian Caesar is well-handicapped off a BHA mark of 77 in the Vertem Nursery (4.45). His defeat of next-time winner Hurricane Kiko at Yarmouth in July was decent, but his third to another next-time winner in Dubai Mile at Windsor last time was even better.

Maximilian Caesar has run at TPD-covered tracks on all three of his runs, so we know that he strides most like a miler and that the late sprint that transpired on his first attempt at the trip last time will not have tapped much of his stamina.

X J Rascal and the less-exposed Grand Central are lively rivals, but the selection could well be a mid-80s-rated horse and should be hard to beat if he is. 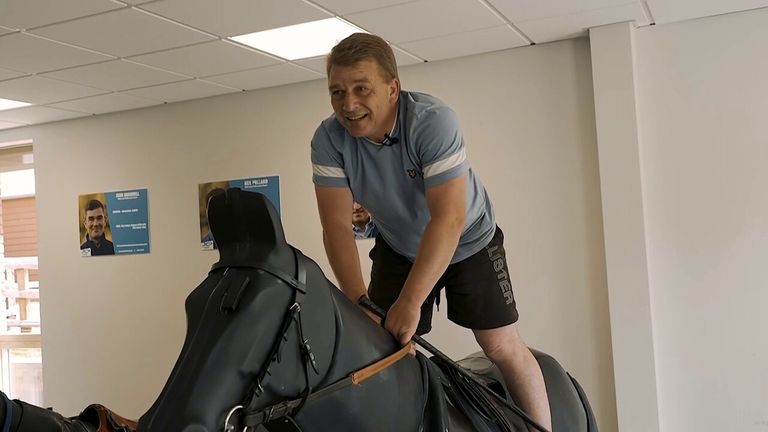 Modern Dancer is similarly well-in on my figures to Maximilian Caesar in the seven-furlong race (2.25) but has not been missed by those bookie chaps.

Stone of Destiny last won at this meeting two years ago, and has more excuses to his name than an underperforming politician, but he has every chance of going close in the opening Apprentice Handicap (1.50). Each-way might appeal if all 16 make it to the start.

That Legends race, over the straight mile, has seen some pretty dismal pace judgement over the years, and looks far too closely knit to invest in the outcome: my odds line had it 7/1 the field.

It will be interesting to see how much ability the veterans Gary Bardwell and Kieren Fallon retain. The latter definitely has a shout on Shine On Brendan.

Watch every race of the St Leger Festival from Doncaster live on Sky Sports Racing, September 7-10.

It’s All Happening — AEW and WWE Now: AEW is going full 'Use Your Illusion' Tour

Mario Cristobal loses another coordinator: Is Miami HC the next Scott Frost?