There are currently five ownership groups in the mix vying to buy the Denver Broncos. But despite five options from which to choose, and promising the groups a fair shot and transparency in the bidding process, the league seems poised to sell the Broncos to yet another old, white billionaire.

Rob Walton, the cousin-in-law of Rams owner Stan Kroenke and the heir to the Walmart fortune, will likely be the next owner of the Denver Broncos. Walton is about as rich as they come, with a net worth of $65.5 billion. The Broncos were originally projected to sell for about $4 billion, which would have made the team the most expensive professional sports franchise in North America, and that’s basically pocket change for Walton. As of Tuesday morning, reports were circulating that the sale price of the team is now expected to exceed $5 billion. There aren’t many people who can compete with Walton’s massive wealth in this realm, and the vast majority of the people who can are other old, rich, white men.

According to a source close to the bidding process, Walton has offered to sweeten the deal by committing $1 billion toward a new stadium in Denver, and he has also indicated that he will just outbid any of the other groups who try to make a serious run at ownership.

The NFL has a diversity problem off the field, and we see that in its hiring practices and in the current demographics of NFL team owners today. Of the 32 teams, just three are owned by people who aren’t white and male. Shad Khan, the owner of the Jacksonville Jaguars, and Kim Pegula, who owns the Buffalo Bills along with her husband, Terry, are the only two owners who were born outside of the United States and aren’t white. Sheila Ford Hamp, a descendent of the extremely wealthy Ford and Firestone families, is the principal owner of the Lions. The NFL has had 110 people in principal ownership positions of NFL teams over the past 100 years, per the Associated Press. Khan and Pegula are the only two non-white people to hold those positions over that span.

Prior to the Super Bowl, NFL Commissioner Roger Goodell stated that increasing diversity in the owners’ ranks was a priority.

“We would love to see a diverse owner of the team,” said Goodell, via CNBC. “Whether that’s a person of color, or a female or a Black man, we think that would be a really positive step for us, and something that we’ve encouraged.”

If the NFL really wants to make the league more diverse off the field, something’s going to have to give at the ownership level. But it appears that’s not going to happen with the sale of the Broncos.

What we know about the sale process so far

Pat Bowlen bought the Broncos in 1984 for $71 million, and when he passed away in June 2019, the team was transferred into the Pat Bowlen Trust. The Broncos announced in Feb. 2022 that the team would be available for sale. The Bowlen Trust retained Steve Greenberg of Allen & Company as their financial advisor and Joe Leccese of Proskauer Rose LLP as the legal advisor for the sale.

We’re aware of the identities of three of the groups bidding on the team — in addition to Walton, there’s a group led by Josh Harris, who co-owns the Philadelphia 76ers and New Jersey Devils, and a group led by Todd Boehly, who is an investor in the Los Angeles Dodgers. There are two other ownership groups in play whose information has not been made publicly available.

What sets Walton apart from these other groups is, you guessed it, his deep pockets. And no matter what was promised to potential ownership groups as far as fairness and transparency in the process, it seems like the deep pockets were the deciding factor.

Walton’s candidacy is supported by Kroenke, who is already a member of the rich old boys’ club that is NFL ownership, and behind the scenes, a source close to the situation told SB Nation that Kroenke is advocating for Walton with the NFL and other owners.

“I know there’s a lot of backroom dealing, and the billionaires are all just playing with people’s lives, like they’re chess pieces,” the source, who spoke on the condition of anonymity due to their proximity to the sale process, said. “But at the end of the day, what we do know is that Stan Kroenke, he has basically been lobbying and pressuring other team owners on behalf of [Rob Walton] to say, there’s only one group that you guys should and will vote for, and [the owners are] a similar group. So it’s really, from kind of every angle, the process seems to have been rigged in the favor of Rob Walton, which unfortunately for the league, is kind of a perpetuation of the same reality that’s causing all the issues with minorities and social justice.

“You can paint platitudes on the field and on the back of players’ helmets. But the reality is, you don’t change the core, fundamental structure of what’s driving the economics of the league, and how that value is being shared between all stakeholders in a more equitable manner and how you can have all stakeholders properly represented.”

That’s hard to do when the purchasing power required to buy a team is so over-the-top to begin with. Walton, who inherited wealth that his family built by essentially running small retail businesses across the US out of business with the allure of Walmart’s low prices, wouldn’t need to assume any debt to buy the Broncos, and on top of that, he could easily toss in an extra billion here to build a new stadium in Denver, and an extra billion there to price out other bidders.

Does Denver even need a new stadium?

Objectively, no. At least not according to Broncos fans. Via SB Nation Reacts:

A billion dollars isn’t going to fully fund a brand new, state-of-the-art multi-use stadium. SoFi Stadium, where the Rams and Chargers play their home games, is estimated to have cost somewhere between $4 and $5 billion. Allegiant Stadium, the home of the Las Vegas Raiders, cost $1.9 billion. Given current supply chain challenges and the rising cost of construction materials, $4 billion for a new stadium that’s up to the NFL’s contemporary standards is a pretty conservative estimate. And based on recent NFL history, it’s fair to expect all of the expenses beyond the $1 billion Walton is reportedly willing to toss in would come out of the pockets of Denver taxpayers.

Nepotism and racist hiring structures are holding the NFL back

Indeed, in 2019 Mr. Flores was scheduled to interview with the Denver Broncos. However, the Broncos’ then-General Manager, John Elway, President and Chief Executive Officer Joe Ellis and others, showed up an hour late to the interview. They looked completely disheveled, and it was obvious that they had been drinking heavily the night before. It was clear from the substance of the interview that Mr. Flores was interviewed only because of the Rooney Rule, and that the Broncos never had any intention to consider him as a legitimate candidate for the. job. Shortly thereafter, Vic Fangio, a white man, was hired to the Head Coach of the Broncos.

The NFL insists that teams adhere to the Rooney Rule, which requires that at least two women or people of color be interviewed for key openings, in good faith despite plenty of anecdotal evidence to the contrary. The league also acknowledges the homogeny of its ownership group and gives lip service to the idea of diversifying it.

But considering the NFL’s strict rules around team ownership — a majority owner must hold at least 30% of a team, and the debt limit on a franchise cannot exceed $1 billion dollars — it would take intentional steps to make team ownership accessible to people other than the most privileged class in the country — multi-billionaires, who tend to most frequently be older, white, and male. And Walton is lucky enough to also have his wife’s cousin — another very wealthy older white man in the NFL ownership ranks — advocating for him behind the scenes.

Instead of prioritizing a diverse ownership group, the Broncos appear to be leaning toward the status quo by selling to yet another old, white, male billionaire. From Woody Paige of The Gazette:

Sources said that Walton is the favorite because (A) he can outbid Harris and associates (B) he has such a close connection to Kroenke, (C) he owns a home in Aspen (in addition to his three-home compound in Scottsdale, Ariz., (D) he has a son and family in Boulder (E) and he likely would build a new stadium in Denver to rival Kroenke’s in Los Angeles.

Notice that there’s zero mention of a diverse ownership group or prioritizing equity and inclusion. It’s just a rundown of how mind-blowingly rich Walton is and how easy it would be for him to pay $1 billion toward a new stadium that Denver doesn’t currently need, and conveniently neglects to mention that taxpayers would foot the rest of the bill.

“A democratic free society with a free market can do things differently, and the NFL could be one of the places where that model is put on full display,” the source close to the bidding process for the Broncos told SB Nation. And that’s not what’s happening behind the scenes.

“Again, I think Rob Walton and Walmart is pretty much the opposite of what the league needs,” the source said. “And I think that’s really what [the NFL] needs to take note of. And more importantly, it’s like, hey, whatever you’re gonna do, run a process that’s fair and inclusive and transparent.”

“Daniel hasn’t shown the talent he has with the bat” - MI bowling coach Shane Bond explains Sams’ promotion to No. 3 vs CSK

3 Cowboys players sure to improve in 2022 season 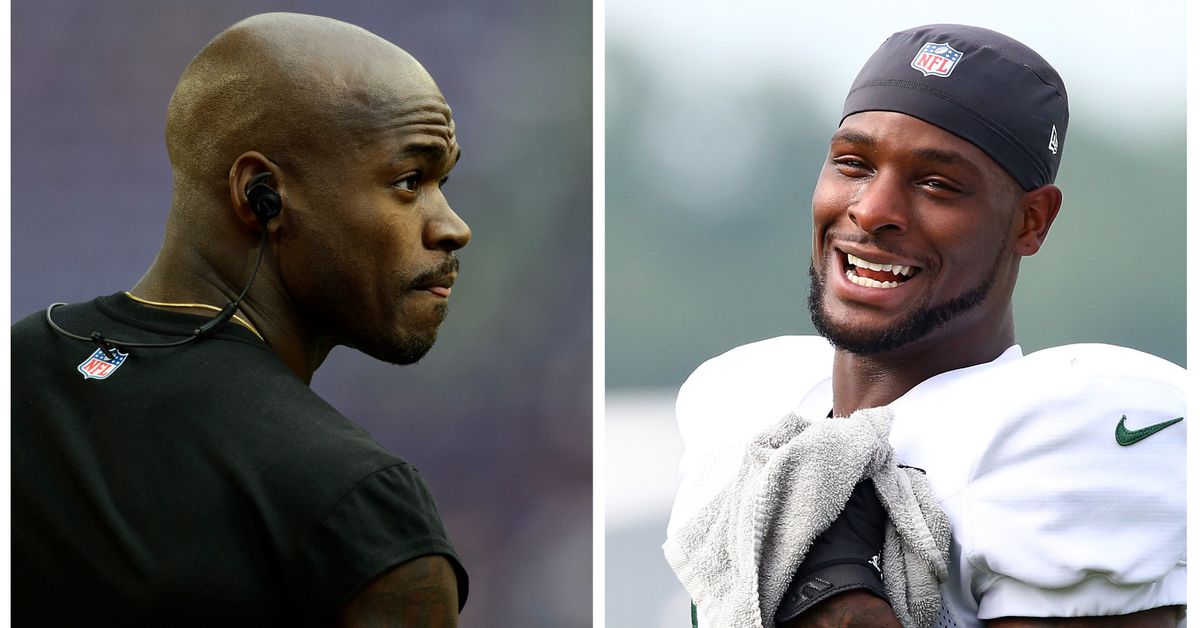