Tony Yeboah. A name synonymous with the spectacular, etched into Premier League history.

His goals against Liverpool and Wimbledon at the start to the 1995/96 Premier League season, a season the Ghanaian would end being crowned Leeds United’s Player of the Year, were the iconic moments of a career which left an indelible mark at Elland Road and beyond.

From the over-the-shoulder volley, which cannoned past David James off the underside of the Liverpool bar, to the chest control and thunderbolt which nearly took the Wimbledon goal out of the ground, the debate over which strike was better rumbles on.

Few players have scored one goal of such quality, let alone two, let alone two off their weaker right foot, as was the case for Yeboah, but it was the goal against his idol John Barnes’ Liverpool which he holds in special regard.

“It was marvellous,” he exclusively told Sky Sports. “John Barnes was my hero. I always looked at Barnes, Ian Rush and thought, ‘wow, they are the great players’.

As we celebrate 30 years of the Premier League, take a look at some of the most iconic moments in PL history, featuring Tony Yeboah’s hat-trick against Wimbledon, including a screamer for his second goal.

“I had the opportunity to play against them, so I had to do something. When I finished the game and came back to my house, I could not believe I did this.

“I do not understand, I am not a right-footed player. I don’t know how I did it. When I see it, I am so proud of myself, they were great goals. I always preferred the one against Liverpool because before the game I met my heroes.”

Yeboah’s penchant for the spectacular earned immediate adulation from the fans of Leeds United and was the highlight of a two-and-a-half season love affair at Elland Road.

“I loved Leeds and felt loved there,” Yeboah added. “Leeds supporters are fantastic. I remember my first game against QPR, my first touch was so bad and yet the fans were clapping. I wondered what was going on, I thought they were going to boo me, but they clapped.

“My game was about being comfortable, and at Leeds I felt comfortable, the fans were behind me, the players were very nice to me. It was like I was home.”

Yeboah was one of the greatest strikers who played in Germany. He had a big impact on society.

Yeboah’s goal against Liverpool took on such significance due to the guiding influence, at a distance, Barnes had throughout the challenging early years of his career in Germany.

Yeboah became one of the first high-profile black footballers to play in Germany when he joined FC Saarbrucken in 1988, but the move brought with it racist abuse no player should have to experience. His arrival as Eintracht Frankfurt’s first black signing in 1990 brought with it even more racist abuse, this time from sections of his own support

Like Barnes, who experienced abhorrent abuse playing in England, Yeboah would rise through this adversity. He would become the first African to captain a Bundesliga side and clinched two successive Golden Boots with Frankfurt in 1993 and 1994 to silence his abusers.

“John Barnes was my hero for a long time,” Yeboah said. “I was so proud of him, as a black player he was performing very well in England.

“I wanted to be like John Barnes, that is what I was trying to do. I was wearing the No 10 jersey, every time I saw John Barnes so something on the pitch, I wanted to do the same thing, and this was when I was in Ghana. 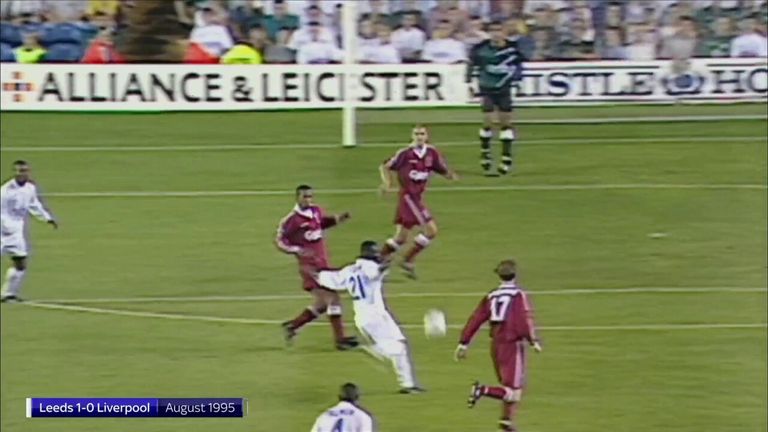 Jamie Redknapp and John Barnes reminisce about playing against Leeds United and Tony Yeboah. The Ghana striker ended up scoring one of the most iconic goals the Premier League has seen.

“He was a motivating person, a person you could follow who could motivate you to do your own thing. I never thought I would have the chance to come to England and play against him – even today I am so proud that I was able to do that. It was great, it was fantastic.”

While Yeboah’s memorable strikes have their place in Premier League history, the legacy of his pioneering career lives on, with a path forged for others to follow in his footsteps.

“I know I was always standing for my people,” he said. “Now we have a lot of black people from lots of different countries playing in Germany and for the national team. It means that we fought for them.

“We Africans, years ago our great, great, great, great grandparents fought for us so we can enjoy life now. The same happened in football, we were always fighting for our youth, and it has worked.

“We are very proud of ourselves, in the beginning it was difficult but now they are there enjoying their football.”

Celebrate the Premier League’s African Heroes throughout Black History Month and beyond across Sky Sports and the Sky Sports Football YouTube channel.

In the case of James Dolan v. lawyers, New York fans are the losers