Heung-Min Son was Tottenham’s hero as his double sealed a crucial 3-1 win over rivals West Ham to boost their Premier League top-four hopes.

Spurs took the lead inside the first 10 minutes when Kurt Zouma – who was repeatedly booed by the home crowd for his cat-kicking incident from earlier this year – diverted Harry Kane’s cross into his own net (9) while under pressure from Son.

Antonio Conte’s side hassled and harried a makeshift back five put out by the Hammers and another swift breakaway saw Son hit the post just minutes after the opener. But it was not long before the South Korean made his mark on the game.

Once again, Kane was at the heart of the move with the England captain playing his favourite team-mate through on goal down the left, before Son slammed an unstoppable shot (24) into the top-left corner of Lukasz Fabianski’s net.

But despite the home side’s early dominance, West Ham put out a reminder of why they refuse to go away in this top-four race. Craig Dawson won a flick-on from Aaron Cresswell’s outswinging corner, leaving Said Benhrama the simple task of a close-range finish (35) in a well-worked set-piece routine.

Son made West Ham pay for Michail Antonio’s missed second-half sitter when he raced through from Kane’s flick-on to slot past Fabianski – and send Conte into wild celebrations on the touchline.

David Moyes’ Hammers and their fans came into the game in dreamland after their Europa League triumph over Sevilla – but the hard load of 120 minutes on Thursday night affected their players’ legs early on in this. 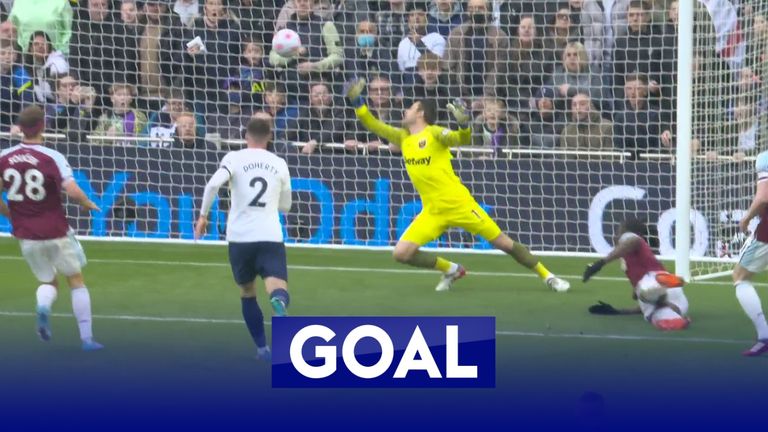 Defender Zouma was warned about his sloppiness when he gave the ball away cheaply on two occasions ahead of Spurs’ opener, before his team-mate Cresswell gifted the home side the early advantage.

Cresswell’s poor pass out from the back was picked up by Matt Doherty, who fed Kane to cut a low cross into Son’s path. The forward was ahead of the ball in but Zouma did the work for him with his outstretched leg making contact with the ball and sending it past Fabianski.

Man of the match: Heung-Min Son

Kane nearly went from hero to zero as his slack backpass was picked up by Antonio, who flashed a shot wide inside the box when he should have done better from the right of the area.

But back came Spurs and Dejan Kulusevski went on a brilliant solo run, with his cross finding Son who struck the outside of the post.

The South Korean went one better midway through the half as a brilliant turn and through ball from Kane found him down the left channel. Spurs’ No 7 stood up Zouma, who allowed a shot across Fabianski’s goal and it was a sumptuous finish into the top corner.

That was the 38th time Son and Kane have combined for a Premier League goal, with the England captain now on 51 top-flight assists. Kane also has a goal or an assist in six out of his last seven Premier League matches. 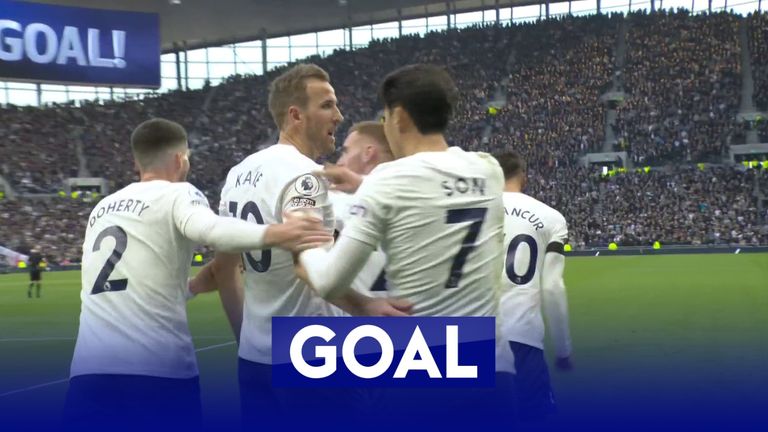 Harry Kane and Son linked up for Spurs’ second

But Tottenham rested on their laurels and failed to add to their advantage which allowed West Ham a route back in.

Dawson beat four Spurs defenders underneath Cresswell’s delivery and that aerial win was crucial for Benrahma to latch onto the ball and slam past Hugo Lloris from six yards out.

West Ham were relieved to go into the break still in the contest but Tottenham tried to turn the screw after the break. Son led a counter-attack before slipping Kane through on goal, but Fabianski did well to get to his feet and deny the striker his sixth goal in five matches.

The momentum from that chance was halted as two protestors ran onto the pitch and tried to attach themselves to the goalposts, in replica scenes to Everton’s stoppage against Newcastle on Thursday, and West Ham grew into the game. 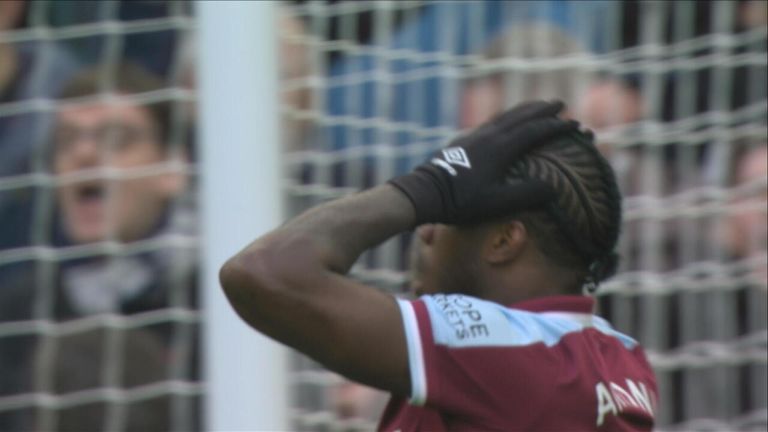 Michail Antonio is inches away from levelling

Antonio wasted another chance when he blasted Cresswell’s cross wide from around eight yards out, before being replaced by Andriy Yarmolenko, who fired into the side-netting down the left within minutes.

As the second-half clock ticked on, West Ham began to tire after their European exploits – and their opponents took control. Spurs cried for a penalty when yet another Kane throughball saw Sergio Reguilon collide with Ben Johnson, but referee Anthony Taylor waved away the home side’s complaints. Spurs’ front three then combined, resulting in a shooting chance for Kulusevski, who fired over.

Despite his excellence in giving the ball in crucial moments, Kane then spurned a major opportunity to put the game past West Ham with 10 minutes left. The Spurs talisman remained onside and was played through from a dink over the top, but could only prod over. 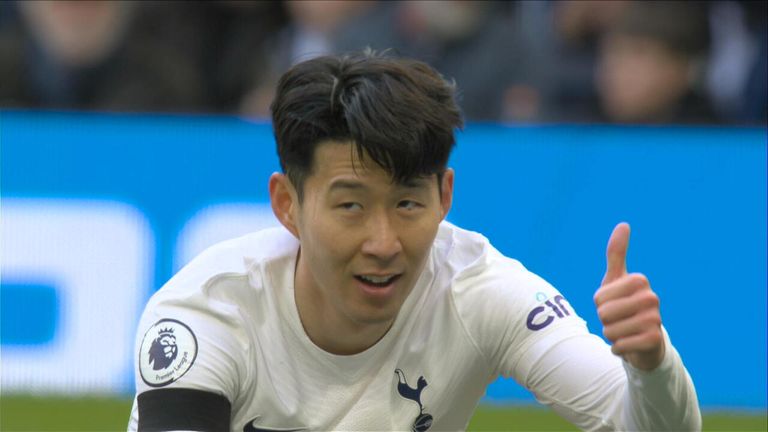 But that wasted opportunity did not matter as Son raced through after Kane flicked Lloris’ goal-kick on for a one-on-one to seal the three vital points.

With the result sealed, Spurs’ faithful rose to their feet to salute Conte with chants of “Antonio, Antonio”, with the full belief they can get a top-four finish and a seat at Europe’s top table for next season.

For Conte, the feeling of back-to-back Premier League victories for the first time since December is slowly followed by the regret of a two-week international break.

“Honestly it’s a pity to have the international break in this moment,” he told his press conference. “We are in a good form and we are in a good moment about our results and the performances.” 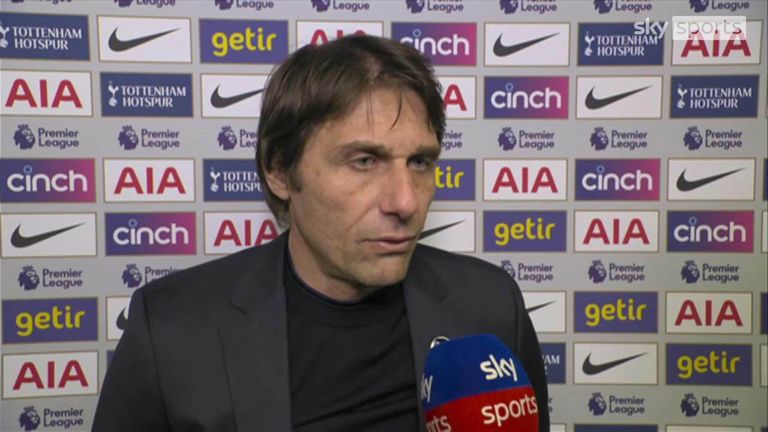 Go back a month and some would have suggested that Conte was on the way out. The comments after his 1-0 defeat to Burnley – which left Spurs eight points off fourth – alarmed many but now the picture is so different.

The gap sits at three points to Arsenal and that is down to Spurs’ improvement both individually and collectively. The Italian mentioned this to Sky Sports before the West Ham game and he repeated this afterwards.

“I have seen great improvement in the mentality, tactically, and technically. We are starting to understand to manage 95 minutes in different ways. I think West Ham tried the first minutes of the second half to punish us and to increase the intensity to control the game.

“It means we are improving. It happens in Tottenham because the level of every single player is improving. The team is becoming a strong team.”

For West Ham, the endeavours of Thursday night ultimately caught up with them but Moyes was more disappointed with the sloppy way his side started the game. 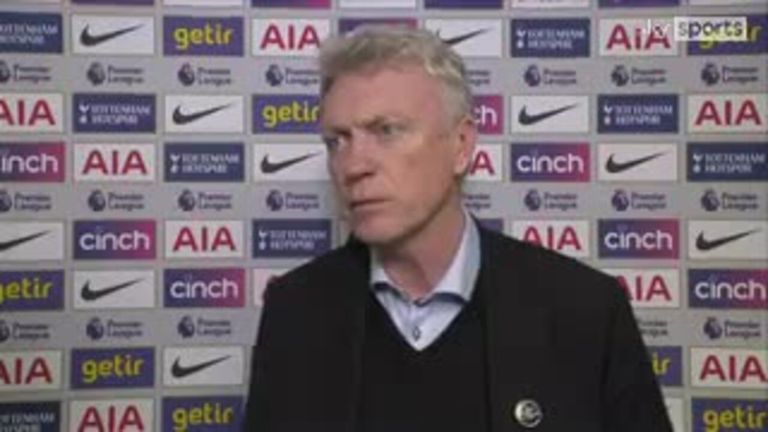 “It’s the opening part of the game that showed it [the tiredness],” Moyes told his press conference. “I’m incredibly disappointed. If you’re the Under-11s coach you would be disappointed with it.

“You could not have picked a worst game [at the end of this big week]. It’s incredibly difficult because Harry Kane is an absolutely world class player and if you don’t get it right… we didn’t quite get it right.”

Analysis: The battle for fourth is on

Things look a lot brighter in north London, and it’s not just the weather. The cold winds from a few weeks back have well and truly gone but a chilling message has still been sent through the air in this area’s divide.

Tottenham are getting their act together and Arsenal should be worried. Now Antonio Conte’s side are breathing down their neck and are within one strike of the Gunners until the middle of April at least.

A lot of the plaudits after Sunday’s result will surround the deadly duo of Kane and Son – whose forms since the start of the calendar year have looked as good as ever. Cristian Romero is becoming a leader at the back and the January additions of Kulusevski and Bentancur are paying off.

Given Spurs have shown the same defensive resilience that Arsenal have showed at Villa in recent game, plus the fact that Lucas Moura and Steven Bergwijn are barely used in Conte’s team, you could argue Tottenham are stronger than the Gunners in terms of squad depth.

Then you look at the April fixture list. In their five games, Spurs play no team higher than ninth in the table. Arsenal are away from home for most of that run, with Chelsea and Manchester United on their agenda.

Throw in a north London derby scheduled for May and Spurs are in good stead. Given the atmosphere from the West Ham derby, Mikel Arteta will ideally not want to take his players to Spurs needing a result.

The mind games have already started when it comes to Conte and Spurs. While there is a pressure for the white half of north London to keep up with the Gunners, Conte hinted that Arsenal have no excuse to throw their various advantages over Tottenham away.

“The only way to put pressure on Arsenal is to get three points – to win,” Conte said. “There are nine games to go, every game has to be a final.

Man of the match: Heung-Min Son

👏 Heung-Min Son is Man of the Match

“From the start of the game, we played really well, especially in the first half. We created so many chances – I hit the post. It’s a massive three points before the international break, so we’re really happy.”

On partnership with Kane: “I just make these runs for another option. If he doesn’t pass the ball, probably there will be space for somebody else or for Harry to shoot. The relationship with Harry I’ve spoken about maybe more than 100 times now!

“It’s incredible having this striker next to me. I really feel sorry for him today that he didn’t score – he had a few chances.”

“Sometimes the confidence can go down but the important players and top players are good to manage in this moment. Sonny you are talking about a really good, important player but at the same time he’s a good person. He suffered for the performance that are not good but especially if you don’t get two points This must be our thing: not to think of ourselves but for the team.”

After the international break, Tottenham have a favourable run of fixtures in April – with only two opponents (Aston Villa, ninth and Leicester, 10th) currently based in the top half of the table, with the remaining three (Newcastle, Brighton and Brentford) near the bottom of the table.

Spurs’ first clash after the break is at home to Newcastle on Sunday April 3 live on Sky Sports Super Sunday; kick-off 4.30pm.

West Ham’s next three games are all based in London, starting with Everton at home on April 3, which is the game before their Europa League quarter-final clash with Lyon. The Hammers face Brentford on April 10 in between the two legs, before travelling to Lyon.

The Phillies OF should probably wear their helmets in the field, too