Last season he was spat on, silenced Madison Square Garden with a finger and cemented his place as the pantomime villain forevermore with the New York Knicks’ crowd.

The main reason for all the hatred is Trae Young’s ability, and the reason it will endure is he demolished the New York Knicks in the NBA Playoffs and revelled in doing so.

The Atlanta Hawks guard endured similar treatment from crowds as he rose through high school and in college so he was able to translate that experience into ensuring he delivered in the big time.

He did so in last year’s playoffs and, for the rest of his career now, Young is going to hear the boos raining down on him inside MSG from his very first touch of the ball. The problem for the Knicks fans, though, is it brings out the very best in him.

Young showed that once again on Tuesday night as he had 45 points and eight assists in his first game at MSG since last season’s Eastern Conference playoff series, leading a late surge that gave the Atlanta Hawks a 117-111 victory. Just like the playoffs last year, it was Young who had the last word.

Picking up where he left off last spring, Young made seven three-pointers, including one that tied the game at 105 with 2:54 to play. He then set up Bogdan Bogdanovic for a go-ahead three and followed another by De’Andre Hunter by leaving Taj Gibson behind off the dribble and knocking down a jumper to cap an 11-0 spurt and make it 113-105 with 1:04 left.

“I think the swag and what we were able to do on the court tonight and the energy we had in the huddle, I knew it was just us versus everybody tonight,” Young said. “And I think if we have that type of mindset each and every game, we’re going to give ourselves a chance to win.”

Bogdanovic added a season-high 32 points for the Hawks, who dropped the Knicks six games behind them for 10th place in the Eastern Conference, the final spot in the play-in field.

RJ Barrett had 30 points and 13 rebounds for the Knicks, who fell to 30-42 to clinch their eighth losing season in the last nine. The only winning record was when they went 41-31 last season to earn the No 4 seed in the East.

The Hawks then beat them in five games in the first round of the playoffs. Young was the star in his first postseason series, ignoring the profane taunts from fans and bowing to the crowd from near midcourt late in Game 5. 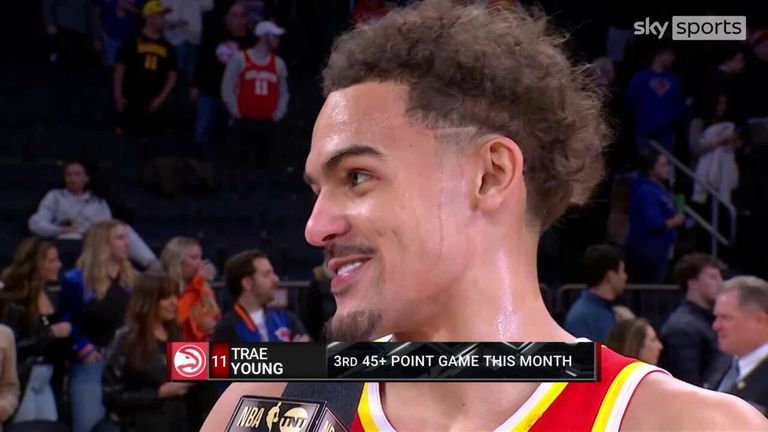 Young reacts to his impressive performance

Young missed the return trip when he was sidelined for the Christmas game because of the NBA’s health and safety protocols. Fans booed him every time he touched the ball early on Tuesday, although that did not last.

“We knew that the crowd was going to have that energy similar to the playoffs and our focus was on us to play good basketball tonight, and we didn’t talk about New York or the playoff series,” Hawks coach Nate McMillan said. “We needed to win this game. It’s a much-needed win for us and that was the focus.”

Young got a pre-game hug from film director Spike Lee, and perhaps the Knicks’ best-known fan, so there was at least a little love for him inside Madison Square Garden.

And did the other fans sitting in the front row speak so kindly?

“Oh yeah, they always do, don’t they?” Young joked. According to Young, though, this time the crowd were not baying for blood.

“There was a lot of people there [being] loud, definitely saying stuff,” Young said. “Could hear a few more people courtside tonight but it definitely wasn’t as loud as the playoffs.”

Alec Burks had 21 points for the Knicks, who played without Julius Randle because of a sore right quadriceps tendon. They led by 10 early in the fourth, but the game changed when Young re-entered with 7:45 remaining.

The Knicks led 34-30 after one, a lead that would have been six if not for Bogdanovic taking the ball out after Barrett’s basket with 0.6 seconds left and flinging it the length of the court to Young, who caught and tossed it in all in one motion.

“It was cool, it was good momentum,” Bogdanovic said, adding he surprised himself a little. 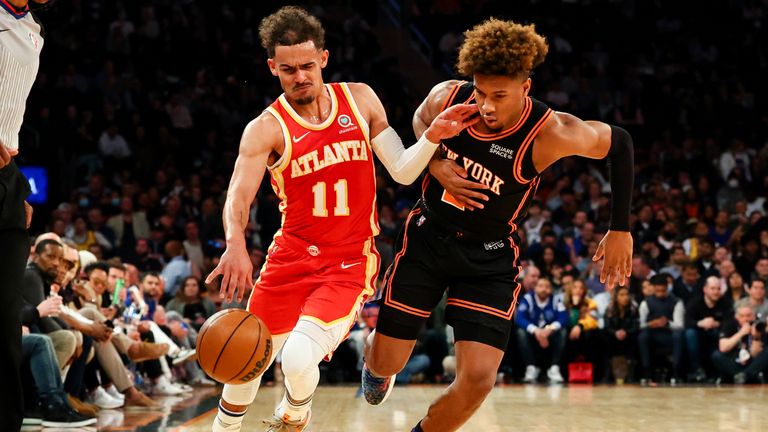 Young top-scored with 45 points as the Atlanta Hawks prevailed

New York extended it to 12 in the second before the Hawks surged ahead by nine and took a 64-58 lead into half-time. Bogdanovic had 15 points and Young 13 in the second quarter, combining for four more points than the Knicks scored.

“We knew we needed to come up here and take care of business first of all and that was my main priority,” Young added.

The win for Atlanta moves them back to .500 on 36-36, which has them 10th in the Eastern Conference standings.

How Russia and Right-Wing Americans Converged on War in Ukraine

Girl on Respirator, In Wheelchair Rescued After Tornado Takes Family Home on 'Wizard of Oz' Ride 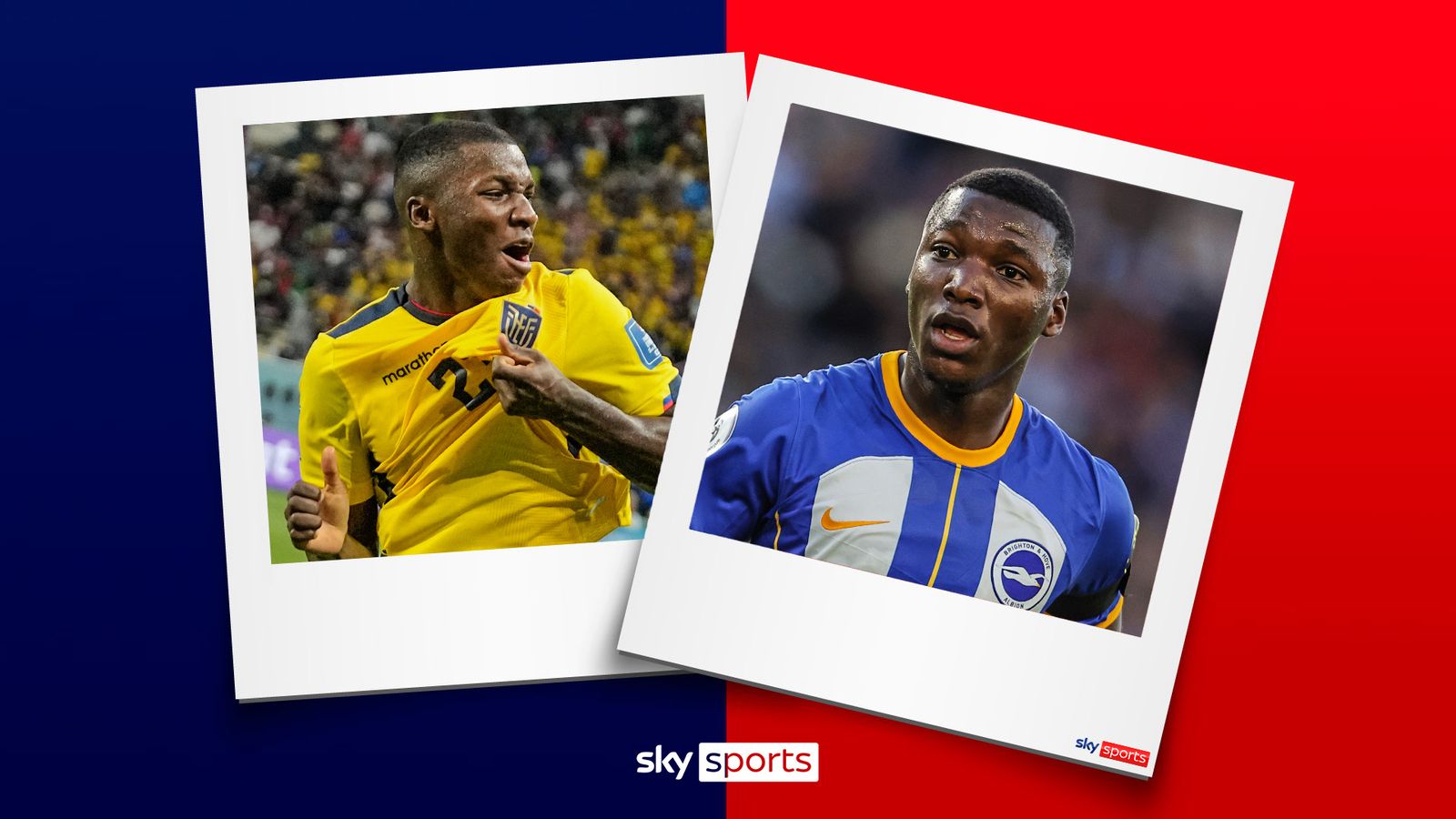