The Miami Heat, setting a franchise record for most points in a season-opening game, rode a 26-2 first-quarter run and 27 bench points from Tyler Herro to a 137-95 win over the visiting Milwaukee Bucks on Thursday night.

Miami also got 21 points from Jimmy Butler and 20 points and a game-high 13 rebounds from Bam Adebayo.

Milwaukee, who went nine consecutive minutes without a field goal in a brutal first quarter and never led in the game, were led by superstar Giannis Antetokounmpo, who had 15 points and 10 rebounds. Khris Middleton was held to 10 points.

Veteran point guard and six-time All-Star Kyle Lowry, Miami’s biggest offseason acquisition, missed his first five shots and finished with five points – on 1-for-8 shooting – and six assists. He didn’t make his first (and only) field goal until he swished a three-pointer from several feet beyond the arc with 11:37 left in the third quarter.

Lowry, who appeared to sprain both ankles during the same second-quarter play, returned to the court just a few minutes later.

The Heat led 105-69 after three quarters, and they cruised from there. For the game, Miami outrebounded Milwaukee, 58-38.

Performance of the Night: Steph Curry

Stephen Curry capped a 45-point performance with two late three-pointers, allowing the Golden State Warriors to spoil a valiant effort by the Los Angeles Clippers in a 115-113 victory in San Francisco.

The Warriors, riding the momentum of an opening win in Los Angeles against the Lakers on Tuesday night, trailed 107-105 before Curry bombed in a 31-footer for a one-point advantage with 1:54 to go.

Eric Bledsoe put the visitors back up by one on a layup with 1:44 left, but Curry nailed another three with 57.7 seconds left. Golden State’s Draymond Green converted an Andre Iguodala assist into a clinching hoop with 11.6 seconds remaining, giving the Warriors a win in their home opener.

Ivica Zubac sank a free throw with 3.7 seconds left to get Los Angeles within two points. He intentionally missed the second, but the battle for the rebound went on long enough for the clock to expire.

Curry scored 25 points in the first quarter alone thanks to a perfect start from the field (9-for-9), from beyond the three-point arc (5-for-5) and from the free-throw line (2-for-2). He wound up 8-for-13 from long distance and completed a double-double with a team-high 10 rebounds.

Paul George led the Clippers with 29 points, shooting 5-for-11 on three-point attempts. He also found time for team highs of 11 rebounds and six assists. Guard Trae Young, who had 28 double-doubles last year, picked up where he left off by recording 19 points and 14 assists to lead the Atlanta Hawks to a 113-87 win over the visiting Dallas Mavericks.

The win ended Atlanta’s two-game losing streak to the Mavericks and the Hawks are now 24-6 at home since February 21.

Young was 6-for-16 from the floor, two of them three-pointers, in 33 minutes and scored a near statistical draw with Dallas rival Luka Doncic, who had 18 points on 6-for-17 shooting, with 11 rebounds and seven assists. 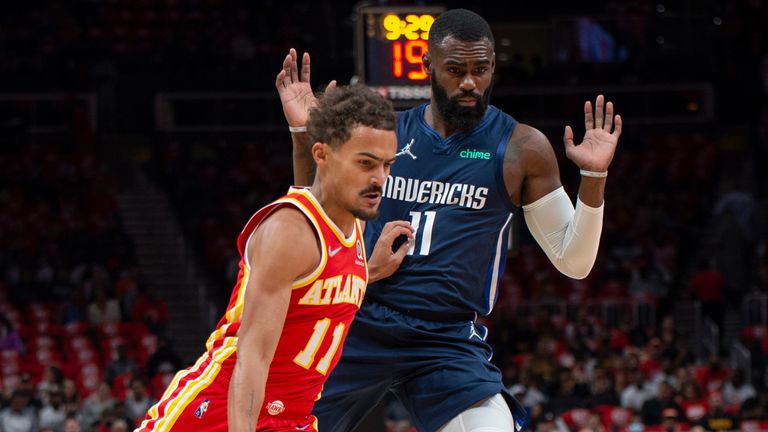 Both Trae Young and Luka Doncic had impressive nights in Atlanta, but it was the Hawks who ended on top.

Doncic, guarded most of the night by Atlanta’s De’Andre Hunter, was only 2-for-7 on three-pointers.

Cam Reddish came off the bench to lead the Hawks with 20 points on 7-for-15 shooting and three triples. All five Atlanta starters scored in double figures: John Collins tallied 16 points and nine rebounds; Clint Capela had 12 points, 13 rebounds and two blocks; Bogdan Bogdanovic and Hunter each scored 11.

The Hawks shot 47.9 per cent from the floor while the Mavericks shot just 33.3 per cent. Jalen Brunson came off the bench to score 17 points, Tim Hardaway Jr added 14 points and Kristaps Porzingis scored 11 for Dallas.