Arsenal remained two points ahead of Chelsea at the top of the Women’s Super League after an entertaining goalless draw at Kingsmeadow but should there have been a late penalty awarded to the home side?

Chelsea remained two points behind their rivals with a game in hand after both sides missed late chances to secure victory, while the hosts had a strong appeal for a stoppage-time penalty turned away.

Referee Rebecca Welch deemed that Leah Williamson’s arms were in a natural position to block Niamh Charles’ cross as Chelsea were denied a late spot-kick.

Sky Sports’ Andy Hinchcliffe said on commentary: “I think Williamson has got away with one. Her arms are up. She’s looking to block the ball and she knows she should’ve given a penalty away.

Karen Carney and Sue Smith discuss the incident where Chelsea were not awarded a penalty in their WSL game against Arsenal and say the error could have big repercussions in the race for the title.

“She knows it’s hit her arm. And she is very, very lucky to escape. When the cross comes, she jumps and her arms are up. They’re away from her body. Did the referee see it? Maybe she was looking through the body of Leah Williamson so maybe that’s what saves the Arsenal centre-half.”

This was a game-changing moment and one that has potentially cost Chelsea. It’s difficult but we’ve got to be in a position to help officials see those things easier to make more efficient decisions.

Speaking afterwards, Sky Sports’ Sue Smith felt that Williamson’s reaction indicated she was aware the ball had struck her arm.

“Sometimes, you have to look at the player’s reaction. You could see straight away from Leah’s reaction it was a penalty. Charles did so well to get her cross in and you can just see Williamson’s arm come up.

“I do feel for Rebecca Welch as it was difficult for her to see the hand come up. It would also have been difficult for the assistant to have seen it through so many bodies and from such a distance.

“I feel for the officials but it’s a definite penalty. Chelsea will feel very aggrieved they didn’t get that decision.”

The stalemate means Arsenal remain top of the standings on 31 points from 14 matches played, two points ahead of Chelsea having played one game more than their title rivals.

Sky Sports’ Karen Carney added: “It’s a huge decision. I’m wondering what’s going through the referee’s mind and if she’s thinking it’s the 94th minute, I’m not quite sure and this is a big moment in the game. Do I or don’t I? It’s a blatant penalty.

“The question is whether she can see it from her angle but Leah Williamson jumps up like a star. Why would you put yourself in that position in the first place? The referee might not be sure. It’s a massive, massive error.” 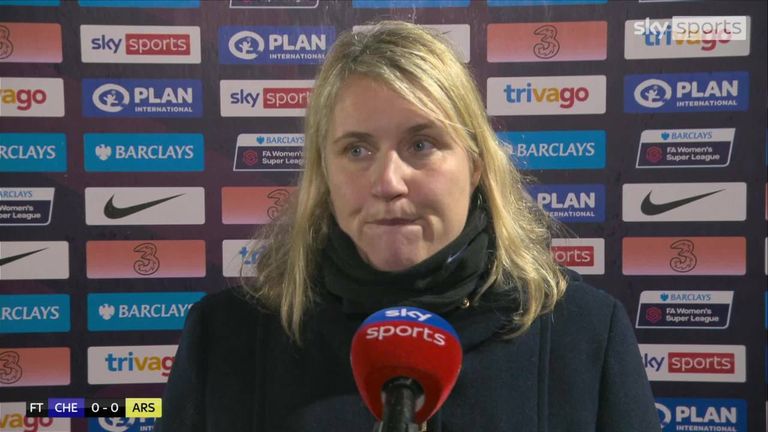 Emma Hayes was seen remonstrating with the officials at the final whistle as two points slipped away to end Chelsea’s 100 per cent home record this season.

“The best official in the league has missed the biggest decision tonight,” she said. “Everybody knows it was a penalty and you don’t need me to say anything. It happens and they got away with that one. Beyond that, the game could’ve gone in either direction.

“I thought we were sluggish in the first half. We took a while to wake up and I said that at half-time but the team responded well. We created chances in the second half but couldn’t put any away. We’re still in a strong position. It’s another clean sheet and I thought the back five tonight were superb.” 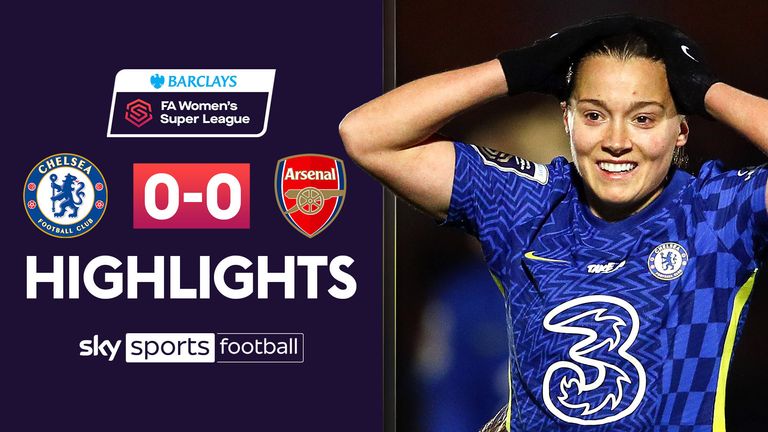 The visitors have wobbled of late, losing to Birmingham and drawing with Manchester United, but welcomed back Williamson, while Stina Blackstenius made her full debut.

Arsenal were the better side in the first half and came closest to a goal in the 20th minute when Vivianne Miedema hit a post with one of several efforts.

Chelsea, who had offered little in attack, did not really threaten until first-half stoppage time, when Pernille Harder and Sam Kerr were both denied by last-ditch defending.

Emma Hayes’ side improved after the break and should have taken the lead in the 55th minute but Kerr failed to make contact with Harder’s cross in front of an open goal before Fran Kirby saw her effort blocked.

It was perhaps unsurprising that Chelsea and Arsenal played out a goalless draw given the sides have recorded 17 clean sheets between them in 27 WSL matches this season, while the Blues maintained their record of conceding just one goal at home in the league all campaign

But Sue Smith, the former England international, said: “It was a game of missed opportunities. Both sides had clear-cut opportunities. 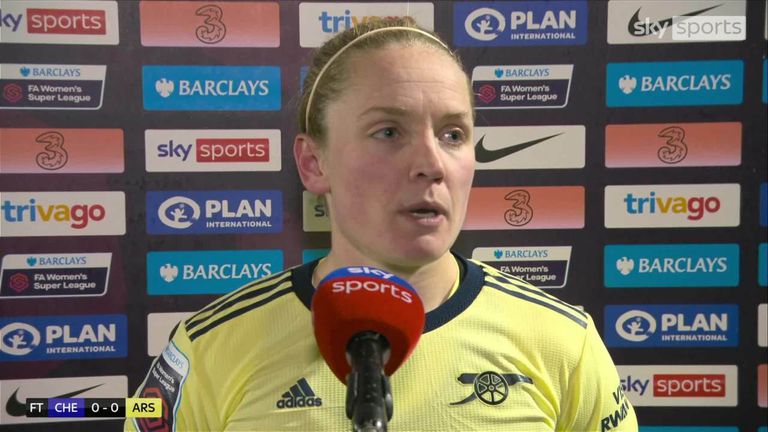 “What a game. You think, ‘0-0, it must’ve been boring’, but it was anything but that. You have two top-quality sides. They didn’t take their chances but what a game it was.”

Carney, the former Chelsea and Arsenal player, shared Smith’s view, adding that the result is “great for the WSL”.

“I’m wondering which manager will be happier with that,” she said. “Jonas Eidevall looked disappointed and his game plan – especially in the first half – was brilliant. It was just the final ball which let them down.

“You could hear Emma Hayes say ‘what a game’ at the end. Two great teams and two great managers. It was great for the WSL and the title race continues. It’s going to go down to the final game of the season for me.”

The Women’s Super League will now take a weekend off for the international break. Chelsea return to action on Saturday, February 26 when they face Leicester Women in the Women’s FA Cup fifth round. Arsenal will travel to Liverpool Women on Sunday, February 27 in the same competition.