Tyler “Trainwrecks” Niknam is a gamer and gambler with 2.1 million followers on the live-streaming platform Twitch, known for his sense of humor, honesty and occasional controversy. But the streamer’s massive following belies months of bubbling dissatisfaction with the platform on which he and other streamers made their names and fortunes. That resentment came to the fore Monday. In a statement posted to Twitter, Niknam blasted recent policy changes at Twitch and gestured at an ambitious plan to, in his words, “make the live-streaming world better.”

“[Twitch] was and is built off of our backs,” Niknam told The Washington Post. (Twitch is owned by Amazon, whose founder, Jeff Bezos, owns The Post.) “They take half of most creators’ sub revenue while charging viewers increased rates just to donate to their favorite streamers, they play ads everywhere and give us terrible ad rates, and ask for exclusivity in return for nothing, all while giving us close to no job security.”

Niknam, 31, says he wants to eventually launch his own live-streaming platform that would let content creators keep 95% of revenue while the company keeps 5%, and told The Post he has investors who believe in his vision. So far, though, the streamer has offered few details on how he will pull it off. Early responses to Niknam’s announcement from peers and other social media users often expressed support and skepticism in the same breath.

Internet sleuths also raised pointed questions about the owners of a platform endorsed by Niknam in his statement. In Monday’s statement, Niknam said he would be advising Kick.com, another streaming platform, in a non-ownership role. He linked users to his Kick account, which accrued 8,000 followers overnight.

Kick.com doesn’t have details on its website about its founders or investors, raising some eyebrows among creators and onlookers.

“I can say confidently that kick.com is a sham,” wrote former Twitch director of creator development Marcus “DJWheat” Graham on Twitter, pointing to the website’s lack of information about its investors. “I can’t sit idly by and watch nonsense be thrown out into the world as a beacon of hope for creators.”

“There are so many red flags present that it is embarrassing watching people who I respect give this platform an ounce of credibility,” Graham added.

In a message to The Post, Niknam confirmed a connection between Kick and Stake, the crypto gambling website Niknam uses on stream. He said that Eddie Craven, whom he described as an owner of Stake, was an investor in Kick. He added that the people behind the site liked his ideas and his Twitch following, so he was able to join as an adviser.

Kick confirmed the news in an email, writing that Craven “is involved in Kick,” though Stake itself is not an investor.

“No comment … but a hundred more questions,” Graham said, when told Niknam had confirmed Stake and Kick were connected.

Twitch cracks down on gambling, but streamers aren’t sure it’s enough

Popular influencers on Twitch have bemoaned the state of the platform for years, from what they perceive as different standards of treatment toward top creators, to seemingly arbitrary enforcement of guidelines. The site recently did away with a 70-30 revenue split it had offered some top creators, and to which smaller streamers had aspired. In September, Twitch banned some gambling, but not all gambling.

Twitch’s policy change around gambling specifies that it would disallow “streaming of gambling sites that include slots, roulette or dice games that aren’t licensed either in the U.S. or other jurisdictions.” The ban includes sites like Stake.com, Rollbit.com and Duelbits.com, while continuing to allow sports betting, poker and fantasy sports.

“I may stay on Twitch to game here and there, but I’m a little irritated at their double standard of banning certain gambling sites they don’t make money from,” Niknam told The Post. Twitch declined to comment, saying it did not comment on individuals.

Niknam is the eighth top streamer on Twitch this year based on hours watched, according to the streaming analytics company StreamElements. The streamer has gambled with the rapper Drake on Twitch before. His livestreams often include disclaimers warning viewers to be careful while gambling, and that participants should expect losses.

Today, the remaining gambling categories on Twitch collectively perform as well as some popular games like “Call of Duty: Modern Warfare II” and “Fortnite,” according to data compiled by Devin Nash, co-founder at creator talent agency Novo.

“I do think Twitch took a bite out of [gambling], but it is alive and well and super popular on Twitch still, and still causing all the problems people think it was before,” Nash said.

Niknam said that in the future, if he is allowed to design the terms of service for his platform, he would want a consistent policy across the board and restrictions against predatory gambling. Kick.com is also unlikely to be his final destination, he said; he hopes to launch his own platform in six months.

“I have a team and my eyes are on multiple platforms. If all work well, I plan on combining [them] into one ‘super platform,’ ” he said. “That’s about all I can say about that for now.”

For now, Kick.com’s community guidelines confusingly say they don’t allow gambling “with other users.” Niknam said the site hasn’t been updated with the real terms of service yet.

We spent a day with Anthony Padilla, YouTube’s interview king

For Niknam, the new platform is also a way to resist Twitch’s 50-50 revenue split for creators. The platform also promises that 100% of donations to creators will go to creators.

Some streamers expressed doubt about the incredibly thin profit margins this would result in for the platform.

“Not gonna lie, a lot of this seems so good, it’s unsustainable,” tweeted Ben “Cohh Carnage” Cassell, a streamer with 1.5 million Twitch followers.

“Full transparency in who and what companies are supporting it in the back end will also be important,” Cassell told The Post. “However, the more competition in the streaming realm, the better. We’ll have to see how it works out long-term with their revenue model, content delivery systems and supporters.”

“Heard about it. Interested to see what it is,” said Ludwig Ahgren, a content creator with over 3 million subscribers on YouTube and followers on Twitch, when asked about Niknam’s upcoming platform.

Despite the criticisms leveled at Twitch, the platform is still the king of live-streaming, pulling in 1.79 billion hours watched in October, compared to YouTube Gaming’s 272 million and Facebook Gaming’s 342 million. Starting a new competitor to Twitch will not be easy, as demonstrated by the death of Microsoft’s Mixer in 2020.

“The good news is the industry can sustain multiple streaming platforms since there is a tremendous audience for live gaming content, but getting to that level is a lot of work based on the graveyard of failed attempts,” said Gil Hirsch, CEO and co-founder of creator tools and sponsorships platform StreamElements. “Revenue shares can favor creators more than the company who provide the platform, but only as long as the company has other revenue models to offset those payouts. It will be interesting to see what solutions he has.”

Hirsch said that Twitch’s features and presentation are a good blueprint for other start-ups, but new market entrants need to figure out how to scale up and get low latency to a community of viewers.

“Competition is always good, hard to say whether this is possible or not with transaction processing fees, so I’m really curious to see what happens,” said Zack, better known as Asmongold, a streamer based in Austin, Tex., with over a million followers. He declined to provide his last name, citing privacy reasons. Asmongold wouldn’t say if he would consider trying out Niknam’s new platform or stick to Twitch, saying “it depends on what’s happened at the time.”

Niknam has told streamers they don’t have to sign exclusive deals with Kick and can continue to stream on Twitch at the same time. (Niknam plans to do the same). He admits that if he left Twitch to stream on other platforms, he might lose some of the large viewership he’s been pulling in for the past year.

“There is a possibility of a temporary decrease until I more regularly stream, but once I do, I truly believe I’ll retain my size or even grow larger,” Niknam said.

As for the content, Niknam plans to continue streaming gambling to his audience on platforms like Kick.

“I’ve been gambling since I was 18 or so, and before that if you count these video games that have microtransactions and luck-based box openings,” he said. “I just love the chance of the unobtainable.”

Niknam said he does not have a contract with Stake. Stake did not return a request for comment. Its CEO directed The Post to a general email address for press, from which the company did not respond.

In the past, Niknam has been accused of moving to Canada to evade taxes and for a way to use Stake legally. (Stake is unavailable in the U.S.) He has denied these claims.

In June of 2021, Félix “xQc” Lengyel, who has 11.4 million followers, accidentally showed his direct messages with Niknam for a split second. Fans took a screenshot of the messages, where Niknam was advising Lengyel on working with gambling sites, adding “That’s why Canada needs to happen asap.” Lengyel did not return a request for comment.

Niknam said he now “frequents” three cities: Scottsdale, Ariz.; Austin, Tex.; and Vancouver, Canada. He said he pays his taxes, though he declined to share financial documents. Niknam also said that he moved to Canada to be with his Canadian girlfriend, whose identity he is keeping private. “As a plus,” he said, in Canada, he’s allowed to use Stake.

An earlier version of this story’s headline said Kick was “backed” by the crypto gambling site Stake. One of Stake’s owners is an investor in Kick, not the site itself. 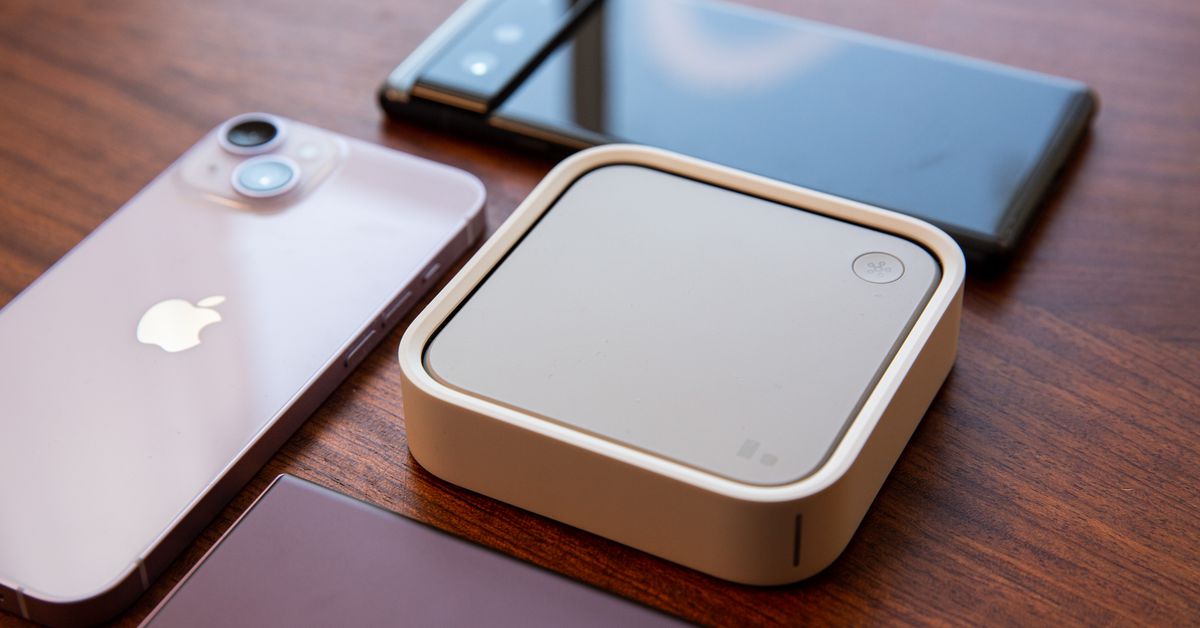