ANAHEIM — The optimism of a change in the Angels’ manager’s office eventually gave way to more frustration, in the form of a franchise-record 13th consecutive loss and an injury to Mike Trout.

Phil Nevin’s debut as the Angels’ interim manager ended with a 6-5, 10-inning loss to the Boston Red Sox on Tuesday night.

Trout came out with left groin tightness in the third inning, long before the Angels suffered another gut-wrenching loss to add to the pile that cost Joe Maddon his job as manager earlier in the day.

“Soft contact is just part of the game,” Nevin said. “When a guy’s pitching like that and hitting his spots, then they’re not hitting balls hard, sometimes they don’t go to the right places.”

The Angels wasted a leadoff double by Tyler Wade in the bottom of the ninth, and then the Red Sox cashed in their automatic runner on a Christian Vazquez single against Jaime Barria in the top of the 10th.

The Angels couldn’t score in the bottom of the 10th. Jared Walsh and Max Stassi both struck out and then Kurt Suzuki – pinch-hitting for Brandon Marsh against left-hander Matt Strahm — grounded out.

“I’m not worried about the morale of these guys at all,” Nevin said. “You all are in that room. We lose and it’s quiet of course but you guys saw the effort today from everybody. Some great at-bats, some good defensive plays. … I thought there were a lot of good things that happened. This was just a baseball game we ended up on the wrong side.”

Amid the disappointment of another loss, the Angels now have to wait to see if Trout misses much time. Trout said this injury “isn’t anything crazy. I’m just being smart.”

He said no MRI is scheduled. They will wait till Wednesday to see how he feels.

It is certainly a troubling development for a team whose season has gone off the rails in the past few weeks, with much of its losing streak coming amid a career-worst slump for Trout. He snapped an 0-for-26 slump with a single on Monday night.

He had his best swings in more than a week against Red Sox right-hander Garrett Whitlock on Tuesday, blasting a two-run homer in the first inning. In the third, he drilled a line drive into right-center field.

Trout did not seem to be running full speed as he cruised into second. A few pitches later, head athletic trainer Mike Frostad and Nevin came out to check on Trout, and they removed him from the game.

Trout missed almost all of last season with a strained calf, so he committed himself to a new training regimen this year. Trout said he was doing more stretching and other exercises to help prevent similar soft tissue injuries.

Until Tuesday, the only games he missed were when he was sick and when he was hit in the hand by a pitch.

Trout’s homer in the first put the Angels ahead, 2-0, but the Red Sox immediately erased that by scoring three runs in the top of the second against José Suarez.

Suarez, though, clamped down and did not allow another run through five innings, while the Angels managed single runs in the second, third and fifth.

Jo Adell drove in a fifth-inning run with a double in his first at-bat after replacing Trout.

That gave the Angels a 5-3 lead, with four innings to coax out of their bullpen.

Oliver Ortega gave up a run in the sixth, but it could have been worse. Adell made a diving catch in right field to limit the damage. 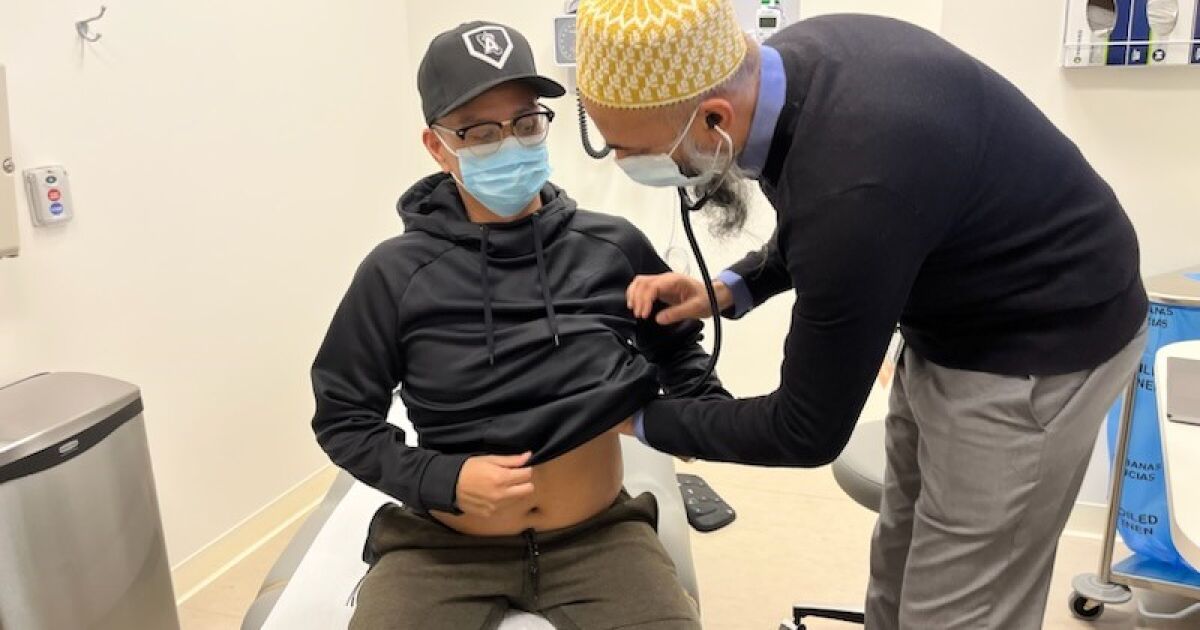