The national average for a gallon of regular gas dipped below $4 Thursday, the first time since early March. The average in California is still higher than $5.30 a gallon, but less than the summer peak of $6.43. Federal and state government officials have mentioned rebates but have yet to deliver.

We hear a lot about high gas prices and their impact on inflation and the economy, especially in a state where a gallon was more than $6 not long ago. A station in Mendocino charged $9.63 a gallon in June. But not much has been done other than the federal government selling some of its Strategic Petroleum Reserves to the highest bidder last month to offset the costs.

Gov. Gavin Newsom and members of the California Legislature have said they are hoping to give residents rebates in the fall. Democrats in the Assembly announced a probe into California’s oil and gas market in June. But nothing was done to help consumers before the Legislature began its one-month summer recess, plus, on July 1, the state kicked in a 3-cent per gallon increase.

Severin Borenstein, an energy economist at UC Berkeley, applauded the formation of a select committee. He said lawmakers should focus on how California’s oil refineries are largely controlled by a handful of companies, including Chevron, Marathon Petroleum and PBF Energy.

“Our refinery market is pretty separate from the rest of the country because we use a cleaner-burning blend of gasoline that most refineries can’t make,” Borenstein said. 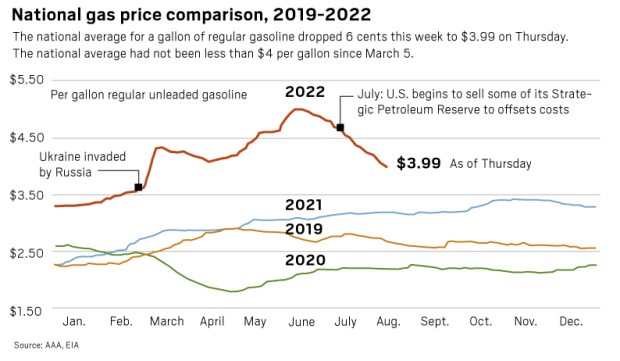