But Premier League clubs have made just four other permanent signings since then, during what has been a frenzied period in past years for big money transfers in English football’s top division.

The lack of activity before the window shuts on Monday is due to twin factors rocking the game: the financial crisis caused by the coronavirus pandemic and post-Brexit immigration rules making it tougher to complete transfers.

“The pandemic has been the big thing [as] clubs are reluctant to spend money now and a lot don’t have it,” said Jonathan Barnett, co-founder of ICM Stellar Sports, the agency that represents stars such as Tottenham Hotspur’s Gareth Bale and Chelsea’s Ben Chilwell.

“As for Brexit, it has affected things. The quality of certain players wasn’t high enough to come into the country . . . so a lot of smaller deals probably haven’t been done.”

Lockdowns have left teams bereft of match-day revenue. Each month without fans equates to £100m in lost ticket sales across English football, according to the Premier League. Last season broadcasters also clawed back rebates worth £330m to cover the four-month period from March last year when fixtures were suspended.

Premier League clubs spent £230m in last year’s winter transfer window, prior to the pandemic, according to consultancy Deloitte, the second-highest figure on record after the £430m spent in 2018. This January, top tier teams have spent just £65.1m on players so far, according to data collated from the Transfermarkt site. The last time the total was below £100m was in 2012, according to Deloitte.

Scoreboard is the Financial Times’ new must-read weekly briefing on the business of sport, where you’ll find the best analysis of financial issues affecting clubs, franchises, owners, investors and media groups across the global industry. Sign up here.

“The transfer market is very flat,” said one Premier League club chairman. “It held up remarkably in the summer [when more than £1bn was spent on player transfer fees by top English clubs] but it was quite distorted by one or two clubs with near unlimited funds . . . in January [there’s] a lot less going on.”

In recent months, teams have also been struggling to offload players to raise funds to buy new ones, often resorting to cheaper short-term “loan” deals instead.

“The pandemic has been hugely, hugely challenging for us,” said a Premier League club chief executive. “We’ll have had to go and get investment to fill the cash gap. It [losing all your gate income] certainly means no transfers this window.”

Football industry executives said some clubs were being stymied by the introduction of new Brexit-rules governing transfers.

English football’s authorities agreed to new immigration rules to govern the acquisition of overseas footballers from this year. 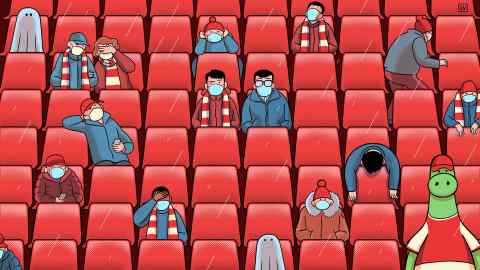 All foreign players must adhere to a new points-based system, based on factors like how often they have played in top leagues or national teams. There are also new limits on the number of players under the age of 21 who can be signed by clubs.

Manchester United’s acquisition of Diallo was the first to comply under the new system. England’s richest club first needed to satisfy the UK’s Home Office that he satisfied the new rules, with the player applying for the visa in person in Rome in advance.

Some football industry executives complained that the new visa system means clubs with fewer financial resources are prevented from signing little known players from smaller leagues — such as Leicester City’s signing of Riyad Mahrez in 2013 from French second division side Le Havre.

Meanwhile, all English clubs face curbs that prevent their past practice of filling their academies with the best young European players, with under-18s prevented from moving to UK teams from overseas altogether.

“It’s hard to tease apart the Covid effect from Brexit [on reduced transfer activity this month],” said Omar Chaudhuri from 21st Club, a consultancy that advises football clubs on player acquisitions. “There has been a double whammy.”

George Clooney reveals he sews his kids' and Amal's clothes